Looking for a great new learning adventure for your favorite students? Assemble your best detectives and join us at Old North for “A History Mystery”. This 2-hour exploratory activity invites students to put on their researcher caps; together they will examine documents and images, investigate clues inside the church, and explore grave markers at Copp’s Hill Burying Ground all in an effort to answer the question that has stumped historians for over 200 years: WHO actually hung the lanterns in the Old North steeple on the night of April 18th, 1775?

In April of 1775, The Sons of Liberty in Boston found out about British plans to send 800 soldiers out of Boston to confiscate weapons being stockpiled in Concord. Fearing the soldiers would also arrest patriot leaders Samual Adams and John Hancock, they planned to send messengers Paul Revere and William Dawes out to the countryside on horseback to warn everybody that the British soldiers were coming.

With the high risk of being captured himself during his ride, Revere devised a backup plan: Thirty additional messengers were stationed across the river in Charlestown, and were told to look to the steeple of Old North Church for a lantern signal indicating how the British soldiers were leaving Boston—“One if by land, two if by sea.” (or river as the case may be!)

On the night of the 18th, the messengers in Charlestown saw two lights appear in the Old North steeple and they set off to warn the countryside. Revere made his own ride to Lexington to warn Hancock and Adams. When the British soldiers got to Lexington the following morning, they did not find the sleeping town they had expected. Because of Paul Revere, the network of riders, and the lanterns displayed in the steeple of the Old North Church, the militia was warned and they gathered in Lexington armed and ready to fight. The shots that rang out that morning marked the beginning of the American Revolution.

We know this story well, but like many important moments in history, there are always questions left unanswered. Can your students help us solve this history mystery?

Read on for a Q & A with our Education Manager TJ Todd, as he gives us a special inside look at the program.

What Is the Format of “a History Mystery”?

The program starts off classroom-style with some context from a staff member: “Why is the Old North Church famous?” and “What was happening in Boston during the time period?” From there, the guide is mainly a facilitator for the discussion while the students take the lead hunting for clues: they look at some written “evidence” and weigh whether it’s helpful or not, then explore the historic site and make their way to Copp’s Hill Burying Ground to look for other hints. Afterward, they return to go over all the clues they found and try to reach a conclusion.

How can educators prepare in the classroom before visiting Old North for “A History Mystery”?

I think one of the best ways to prepare is for teachers to go over what to expect during their visit. The concepts we discuss during the program can be a little confusing for those students who don’t have much experience with churches or the American Revolution for that matter. Going over some of the vocabularies ahead of time, like “steeple”, “redcoat”, “militia”, or “sexton” can really help students focus on analyzing the mystery rather than spending time trying to play catch-up with the terminology. And of course, a quick overview of the history of the American Revolution (or a recap, if the class covered the topic earlier in the year) always helps.

What makes this a great student experience?

I think the most enjoyable part for students is that it’s an actual mystery. The fact that historians don’t technically know even today adds a lot of intrigues when revealed at the end of the program, and they really enjoy formulating a “theory” and trying to find proof. One of my favorite anecdotes is when I had a group that was entirely certain it was Newman instead of Pulling, and when I added the possibility of it being both of them, there was visibly a collective “a-ha!” moment—a whole new possibility had opened up that they hadn’t considered. Virtually every group is still debating when they leave the site, but this one seemed particularly drawn in, and one student said they were going to keep working to finally solve the mystery one day.

How does “A History Mystery” help students solidify other skills and learnings outside of the history of Old North and Paul Revere’s Ride?

Because they have to gather evidence and debate on an issue that (unbeknownst to them in the beginning) does not have a concrete answer, it requires a lot of reasoning and analyzing skills—they have to determine what a particular account is saying, weigh that evidence, and try to draw conclusions. It’s also an insight into history itself, that historians can only work with the evidence they have and can’t make up stories, even if they think they’re probably correct. One other skill they get from this program that I like to emphasize is the practice of seeing both sides of an argument; even the die-hard Newman advocates within a group eventually see that there’s a very strong possibility that Pulling was involved with just a little nudge from their classmates or the guide, and despite their original certainty it’s oddly rewarding to see them doubt themselves as the program goes on. And when we point out that today we still don’t know for sure, I think students leave with another useful lesson: support your argument with facts but also keep your mind open to other possibilities.

Capacity: 40 maximum per program; a minimum of 4 chaperones is required for this program.

For more information on “A History Mystery” and our other school and group tours, visit https://oldnorth.com/on-site-programs/.

For more information or to make reservations, email the Visitor Services Manager at tours@oldnorth.com or call (617)-858-8231 ext.109. Please include the name of your school & school address, the number of students and chaperones, and your preferred dates and times. **Please note we are especially busy with school groups April – June. 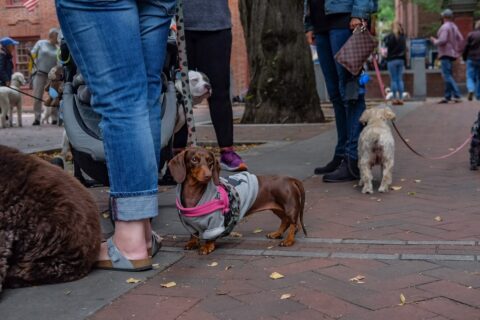 Listen to an interview with Rev. Dr. Matthew Cadwell about the Blessing of the Animals on WBZ News…

On April 18th, 2020, two lanterns were lit in the steeple of Old North Church to mark the anniversary of Paul Revere’s Midnight Ride. The lanterns…