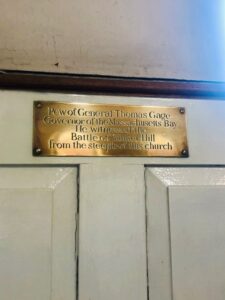 Following the Boston Tea Party in December 1773, the British Parliament deployed over 4,000 troops to occupy Boston. Their mission: enforce the Coercive Acts, designed to punish colonists for the Boston Tea Party and suppress insurgency within the colony. General Thomas Gage (1719- 1787) commanded these forces and, according to tradition, worshiped from pew 62 during his tenure as Military Governor.

As a temporary member of Old North Church, General Gage familiarized himself with the North End’s layout and geography. With a garrison and artillery battery situated atop Copp’s Hill, General Gage is said to have employed the Old North Church as an observation post. From the height of the steeple, Gage could direct artillery fire and troop movements to almost anywhere in town.

Indeed, according to tradition, Gage did exactly that on June 17, 1775, using the steeple to observe and direct the gun battery during the Battle of Bunker Hill. Legend continues that following the brutal battle, the British troops used the church as a field hospital for the wounded and dying. An estimated one hundred British soldiers were buried in the crypt, including Gage’s second-in-command, Major John Pitcairn.