300 Years Of The Clough House At Old North

The Home: What Is the Clough House? 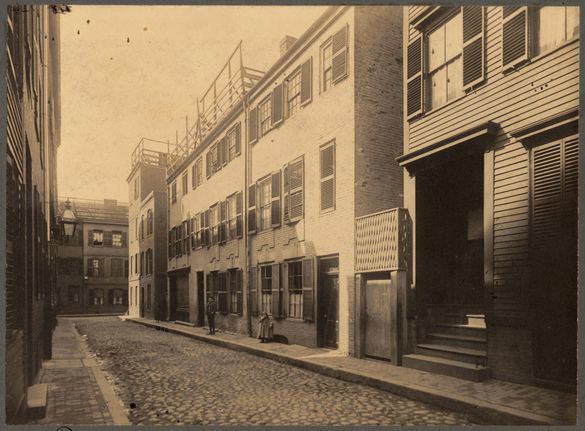 The Clough House is the building on the Unity Street side of Old North’s campus that houses the Printing Office of Edes & Gill and Heritage Goods + Gifts. It was built on pastureland around 1715 by Ebenezer Clough, who was the master brick mason of Old North Church. Before he began work on the church, he built this house for his family as well as five other houses like it on Unity Street. The Clough House is one of only three remaining brick structures that date to the first decades of the 1700s in Boston, making it quite unique today.

While it was originally constructed as an elegant single-family home, this building has served many purposes over time: a single-family home, a tenement for many families, and a house museum. Now it serves a variety of purposes for Old North Church & Historic Site, including exhibit, gallery, office, and storage spaces. The Clough [rhymes with “fluff”] House witnessed all the changes in its surrounding neighborhood over the past 300 years while it too changed to meet the needs of the community. 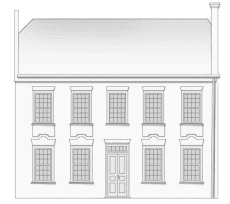 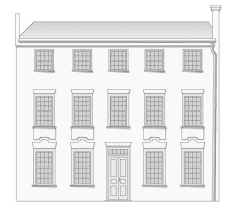 Clough House as it appears today, with the third floor added in 1808.

The People: Who lived Here?

After the death of Ebenezer Clough in 1724, the house changed owners several times. Each of these owner-occupants was upper-middle-class and of English descent. In 1808, a third floor was added to the Clough House and the house was divided into multiple, increasingly crowded rental units. Gradually, it became a tenement. Between 1810 and 1944, 180 different middle- to working-class families called the Clough House home. At the height of the tenement period, 29 people lived in this one structure simultaneously.

Until 1870, the people who lived in this building had English or Canadian roots. Then Irish immigrants moved in, followed by Italian immigrants about a decade later. Although this influx created the most ethnically diverse time period of the Clough House, it differed greatly from most other North End tenements because African-Americans, Jewish immigrants, or Portuguese immigrants did not live here. By the early 1900s, only Italians and Italian-Americans occupied this home, corresponding with a massive wave of Italian immigration to the United States. 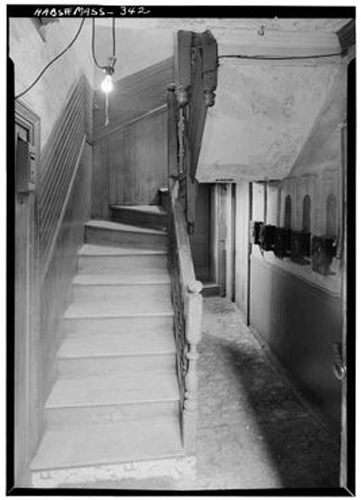 Interestingly, the documentary and the archaeological record reveals the more everyday, personal side of tenement life, recreating the stories of two groups often absent from the historical record: women and children. A large amount of children’s toys and female-related artifacts – such as doll parts, marbles, lipstick, and a pie plate – discovered during a 2013 archaeological excavation paints a rather touching picture, as City of Boston Archaeologist Joseph Bagley writes, ” … women gardening, children playing, letters to write, pies in the oven, families doing what they could to get by and lead a normal life.”

The Neighborhood: What Does the Clough House Say About Its Community? 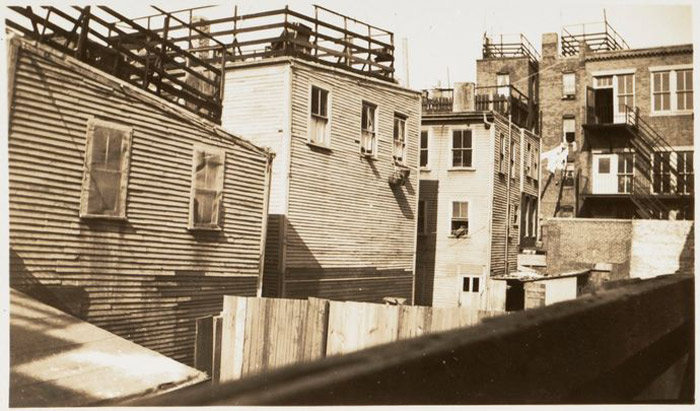 This one small plot of land represents the needs, experiences, and domestic lives of hundreds of people while also serving as a microcosm of Boston. As English, Irish, Portuguese, Jewish, and Italian immigrants moved to Boston in massive numbers, living conditions worsened over time, particularly in “cheaper” neighborhoods like the North End. 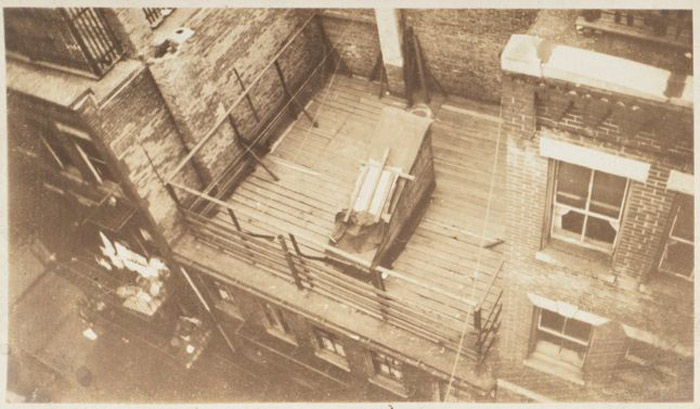 By 1855, it was the most densely populated neighborhood in Boston. Overcrowded tenements led to unsanitary conditions for tenants, and serious illnesses like tuberculosis and cholera afflicted the immigrant populations on a large scale. Moreover, many families often moved from one tenement to another, indicating transience and instability that defined the community here for over a century. 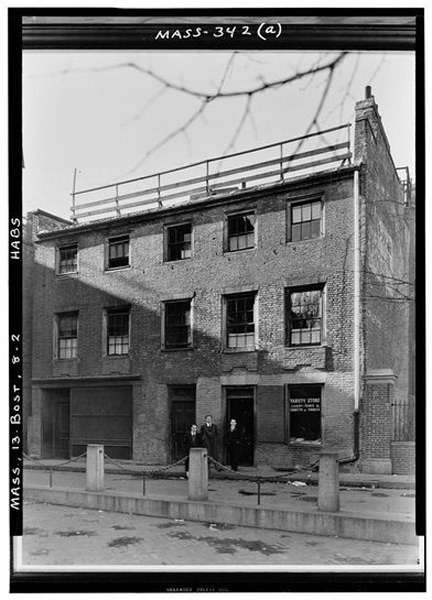 The Restoration: How Did the Clough House Evolve and Why Was It Saved?

By the 1920s, after two centuries of hard use and multiple additions, the Clough House fell into such disrepair that it was deemed a fire hazard, along with several other tenements abutting Old North Church. A philanthropic membership organization called the Lantern League made plans to purchase and demolish these “fire menaces” out of fear they compromised the structural integrity of the church. Thankfully, a Historic American Buildings Survey (HABS) was conducted by the National Park Service sometime after 1933, and its architectural and historic importance was established by the Society for the Preservation of New England Antiquities (now Historic New England) in 1960. 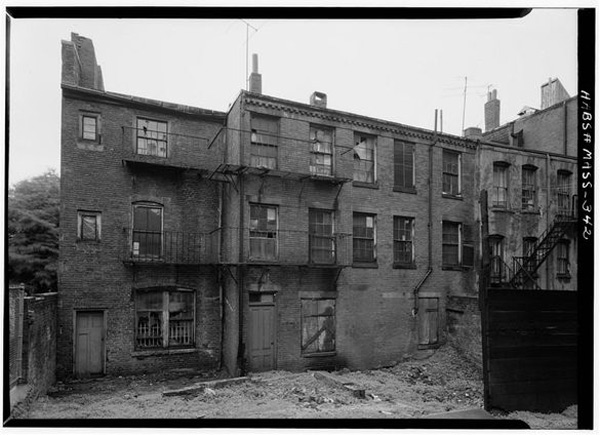 After the HABS report was published, Old North Church embarked on a historic preservation initiative to restore the building, which is detailed in old issues of the church’s newsletter and other Boston newspapers. After restoration, the Massachusetts State Federation of Women’s Clubs assisted with the upkeep of the space for forty years, decorating rooms in period furniture and holding social engagements here. In 2011, the Clough House became a space for historical interpretation at Old North. Today, it stands as a testament to the architectural prowess of Ebenezer Clough, the indomitable spirit of immigrants working for a better life, and the countless individuals who valued its history and fought to save it from demolition. Old North Church & Historic Site is dedicated to the lasting legacy of this precious structure.

This Place Matters: What Is Historic Preservation?

Preservation is a celebration of the past. Historic parks, homes, even whole neighborhoods, ground people in the history of the communities where they live, work, and visit. The charm of a street lined with 18th-century Federal brick homes or the scale of a district dotted with 19th-century single-story storefronts reveals a sliver of the past to modern eyes. Some historic structures have held their ground for decades (or even centuries), and their presence dictates how the city grows up around them. Historic preservation embraces the restoration and maintenance of significant historic places as museums or historic sites. It also supports the adaptive re-use of important buildings for new purposes.

Over the last 150 years, the American preservation movement has evolved from the preservation of individual landmarks associated with well-known individuals to the protection and interpretation of a breadth of historic places that represent the social, domestic, educational, and work lives of a diversity of Americans. While some historic places are adapted to serve contemporary functions, others inevitably disappear to make way for the new. As preservationists, we choose to honor the cultural and architectural heritage of a place and celebrate the symbiosis of the past and present. 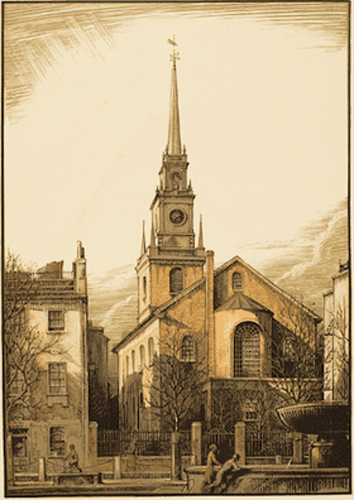 For more information about the Clough House, check out this webinar with Erin Wederbrook Yuskaitis: