We are an active Episcopal Church shining beacons of light, justice, and love in Boston and beyond.

God’s people of diverse backgrounds find a home with us as we embrace our founding call to be a “House of Prayer for all people.” Our congregation numbers about 150 parishioners, reflecting the makeup of downtown Boston with young professionals, a sizeable LGBTQ+ community, and families with young children. We welcome college students from across the world, members of the U.S. Coast Guard stationed in the North End, empty nesters, and retirees. Parishioners live throughout the Boston area – neighbors in the North End and Beacon Hill, many commuting from the suburbs, and some coming from as far as New Hampshire. Our online community joining us for worship includes family and friends who live across the country and world.

The Old North community is committed to Gospel principles of justice and service, striving to make a positive impact in our neighborhood, city, and the world. We are dedicated to learning from our history in order to be a more faithful, inclusive, and loving community, nourished and sustained by scripture, sacraments, music, fellowship, and outreach beyond our walls.

We are not just a museum or historic site. We are an active community of Christians who cherish the stories and legends of our extraordinary past while living fully in the present.

The Right Rev. Alan M. Gates, Bishop of Massachusetts, is the ex-officio rector of the Old North Church, a reflection of our unique status as an historic mission and national shrine. The bishop is represented by our vicar-in-charge, the Rev. Dr. Matthew Cadwell (who acts vicariously for the bishop and oversees our worship, ministries, and programs).

Our congregation is governed by the vestry of Christ Church in the City of Boston, elected lay leaders who meet monthly to oversee the operations and ministry of the church. One of the original parishes of the Episcopal Diocese of Massachusetts, (est. 1784), Old North was reclassified as a mission congregation in 1939, a status we maintain in recognition of our vocation as a national landmark. Together with other Episcopal churches, Old North is part of the worldwide Anglican Communion.

We warmly invite you to join us in our life together, whether you are visiting Boston for a brief time or looking for a permanent church home. Married or single, gay, straight, transgender,  young or old, whatever your race, color, background, religious questions, doubts, or concerns, you are welcome at the Old North Church, a House of Prayer for all people. 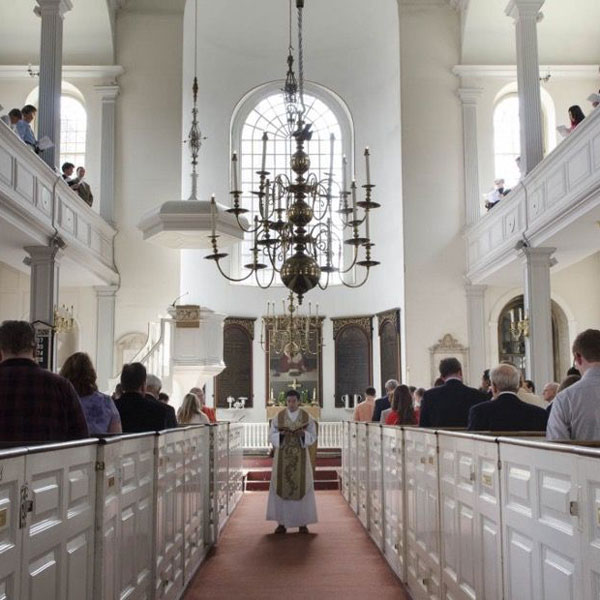 Open and Welcome to All

The congregation and clergy of Christ Church-Old North strive to keep faithful to the mission of openness and welcome proclaimed by Timothy Cutler in his inaugural sermon on the text from Isaiah, “My House shall be called a House of Prayer for all people.”

Join us for live-stream worship any Sunday beginning at 10am. All services are recorded and may be seen at any time on our YouTube Channel.

If you would like to join us for in-person worship on Sunday at 11am, please click here to register, or contact the church office via email:  congregation@oldnorth.com. Please note – registration is requested prior to 3pm Saturday before the Sunday service.  Masks are suggested but not required in the sanctuary.

Old North Is a National Shrine

A place of pilgrimage for hundreds of thousands of tourists every year. When sexton Robert Newman and vestryman John Pulling shone two lanterns from the steeple on April 18, 1775, they signaled the birth of the American nation and the beginnings of the freedom which we have long cherished and still strive to proclaim. Nearly a century later, in 1861, Boston poet Henry Wadsworth Longfellow used the story of the lanterns and Paul Revere’s ride to rally his fellow Northerners to persevere in the fight against slavery. With the publication of “Paul Revere’s Ride,” Christ Church-Old North Church became an internationally known symbol of freedom from all forms of tyranny and oppression.

To citizens of the nation and the world, our church is a shrine to liberty. For our congregation, the church is a place of prayer, service, and love, the gathering place of our diverse faith community. We invite you to join us in our life together as we approach 300  years of worship, ministry, and outreach. You are welcome here.

History of the Congregation

Built in 1723, Christ Church in the City of Boston, better known as “the Old North Church,” is both the oldest church building and the oldest Episcopal congregation in Boston. Although established as a Puritan city, Boston’s colonial Anglican community outgrew the first Church of England parish (King’s Chapel, est. 1688), necessitating a second church in the North End of the city. Local master builders followed sketches of London churches designed by Sir Christopher Wren and raised the building in six months. The soaring steeple that shaped American history was added in 1740.

The first rector was the Rev. Dr. Timothy Cutler, a Congregationalist minister and rector (president) of Yale College until his conversion to Anglicanism. After returning from London for ordination in the Church of England, he preached the inaugural sermon on the Isaiah text, “My house shall be called a House of Prayer for all people.” Early congregants reflected all social strata, including wealthy colonists, ship captains, farmers, artisans, enslaved and free African Americans. Over 100 enslaved and free Africans were baptized, married, and buried at Christ Church in the 18th century.

Charles Wesley, co-founder of Methodism, preached at Christ Church over successive Sundays in 1736 (the only extant church in which he preached during his 1735-1736 trip to North America). In 1850, Paul Revere, then 15 years old, joined the guild of bell ringers – the second signatory on the charter – soon becoming familiar with the tower he would make famous.

Prior to the Revolution, those who would become Patriots worshiped alongside Gen. Thomas Gage, royal military governor, and Maj. John Pitcairn of the royal marines. The Rev. Mather Byles, Jr., Loyalist second rector, was dismissed on April 18, 1775. That night parishioners Robert Newman and John Pulling shone two signal lights from the steeple, alerting Patriots of the king’s troops advancing toward Lexington by water. The first Revolutionary battles were fought the next day. Thereafter, the church was closed until 1778 when the Rev. Stephen C. Lewis, a British army chaplain, swore allegiance to the United States and became third rector.

In 1779 the vestry voted “that the Rev. Mr. Lewis be desired to prepare a proper form of Prayer for the Congress of the United States, for the several States, and for their success in the present important Contest, to be used Daily in the Church.” Prayer Book references to the king were covered and prayers for the Continental Congress added. After the Revolution, Christ Church joined the new Protestant Episcopal Church in the United States.

The Rev. Dr. Asa Eaton led the church from 1805-1829 through a period of tremendous growth, including establishment of the first Sunday school in Boston and a Presidential visit by James Monroe in 1817. But being situated in an increasingly poor immigrant neighborhood led to financial struggles. Evidence of challenging circumstances was the “Fragment Society,” in which parish women sewed clothing for poor children to wear to Sunday school and returned by Monday morning for use the next weekend.

Christ Church’s vestry welcomed the first woman into its ranks in 1911—Miss Matilda Bibbey, a teacher in the heavily immigrant community of the North End. She served as the sole vestrywoman into the 1920s.

The church undertook a major renovation in 1912, attempting an authentic colonial appearance with the reinstallation of box pews, wineglass pulpit, and white color scheme. The renovation was overseen by Bishop William Lawrence, who personally undertook the necessary fundraising. Former President Theodore Roosevelt attended the reopening service.

As the neighborhood welcomed new waves of immigrants, the congregation responded by building a chapel to serve Italian Waldensians, a Protestant community predating the Reformation. The St. Francis Chapel, built in 1918 and decorated in Italianate style, served this congregation into the 1950s. Once no longer needed for worship space, the chapel was transformed into the Old North Gift Shop, in support of the increasing number of tourists.

Old North became a mission of the Diocese of Massachusetts in 1939, due to low membership and  financial hardship during the Great Depression, with the bishop of Massachusetts holding the title of rector and a vicar overseeing regular ministries. The Rev. Francis Ellsworth Webster, rector since 1930, served as the first vicar until his death in 1941. The church became an increasingly popular tourist site into the 20th century, even as successive vicars and congregational leaders sought to find ways to minister in the neighborhood.

The Rev. Dr. Robert Golledge, vicar from 1971 to 1996, led the church during the nation’s Bicentennial celebrations, inviting President Gerald Ford to speak on April 18, 1975 – the 200th anniversary of the hanging of the lanterns – and overseeing the visit of Queen Elizabeth II in July 1976. He spoke forcefully to church and city on racism and desegregation, serving on Mayor Kevin White’s bi-racial committee on violence and hostility.

The Old North Foundation was established in 1991 as a separate non-profit, managing the historic site programs and building preservation. Its skilled staff share the story of the Old North Church with the nation and world.

In 1997 the Rev. Stephen Ayres was appointed vicar and eventually as Executive Director of the Old North Foundation, overseeing an expansion of educational programs and building restoration.  Recent research revealed that some early parishioners had been slave ship captains, leading to a renewed emphasis on racial justice and the need for further study as we seek to embody the liberty and freedom that make Old North well known.

The Rev. Dr. Matthew P. Cadwell joined Old North as vicar-in-charge in 2020. We anticipate our 300th anniversary in 2023 embracing the call to shine beacons of light, justice, and love in our city and world. We are committed growing in membership and diversity, ever expanding our understanding of freedom to include all of God’s people in each new age. 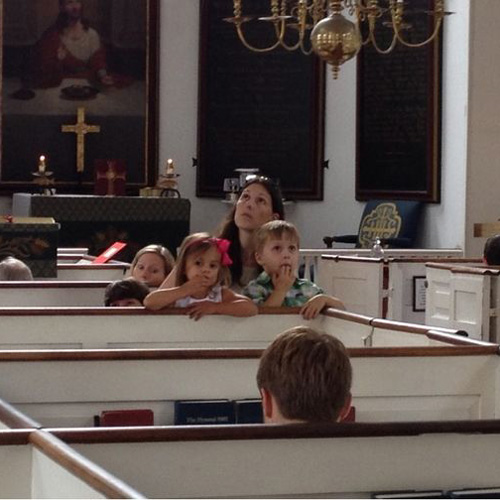 Becoming a member of the Episcopal Congregation of Old North Church is easy.