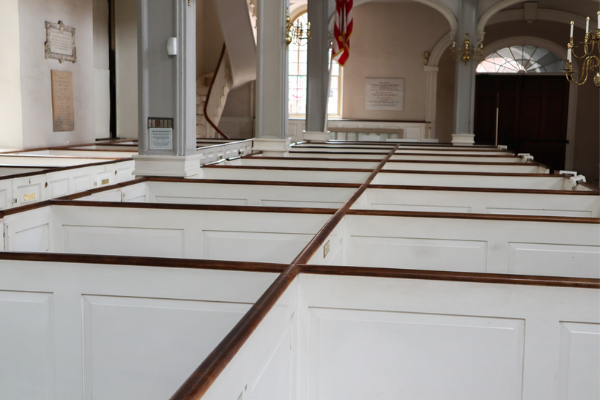 Over the course of (almost) 300 years, many fascinating people have come through the doors of Old North Church and sat in its unique box pews. Read about some of them in our continuing series, This Old Pew. You’ll find a few names that you might recognize, and others that you’ll want to know more about.

Click on the names below to hear the stories of Old North’s most interesting congregants and visitors!

This Old North congregant famously eluded punishment for smuggling. His gravestone, on the other hand…

A Loyalist doctor with a remarkable post-war career.

Forever stamped on the brass plate of Pew No.8, the name Mary Gibbs stands out amongst the merchants and sea captains.

For men like sailmaker Alexander Chamberlain, church wasn’t just a place to worship, it was also an important way to establish business connections.

The prominent colonial family that managed to leave its mark all across the Greater Boston area.

From court martial to the USS Constitution, Captain Samuel Nicholson had a career that was anything but dull.

Newark Jackson’s violent end leads to an understanding of the complexity and corruption of colonial trade.

Long before the Civil War and their connection to the 54th Massachusetts, the illustrious Shaw family had roots at the Old North Church and in the American Revolution.

From hiding tea in his shoes to hiding Old North’s silver from the British army, John Hooton, Jr. came out of the Revolutionary Era with some tales to tell.

The troubled tenure of Rev. Smithett begs the question—who would win in a fight: a minister or a church warden?

An enterprising sea captain brings a lion to Brattle Street.

His donated angels are one of the most popular items in the church, but Captain Thomas Gruchy himself remains an enigmatic figure.

“And let the people say Amen”. It may seem like a simple phrase, but with those words Rev. Timothy Cutler rocked the Puritan church and led the way for the founding of Old North.

The co-founder of Methodism finds a pulpit and a physician at Old North.

A generous donation sheds light on an 18th century philosophical and religious debate.

This congregant’s social circle ran the gamut from the most prominent families in Boston to a dueling brother wanted for murder.

A woman believes her missing husband to be dead, only to have him reappear—one month after she remarried.

Stepmother or sister-in-law? Brother or son-in-law? The Wells-Adams family tree is more complicated than most!

#49 AGAIN — THE SOUNDING BOARD

What is that strange thing floating above the pulpit? And how old is the pulpit itself? One answer is simple enough; the other, rather complicated.

Robert Newman is perhaps the most famous sexton ever to serve Old North due to his participation in the fateful events on the night of April 18, 1775.

No, Paul Revere did not worship here. But one of his sons did!

A century ahead of her time, a young, unemployed 30-something achieves the Millennial dream of buying a small farm in the countryside.

A Loyalist Customs official’s experiences reveal the violent side of Boston during the Revolution.

The Revolutionary War forced Old North to close its doors.  Its future remained uncertain until the arrival of a former chaplain in the British army.

How did this humble and self-effacing rector of Old North come to be regarded as “the Bard of Boston” and “the third of a great triumvirate of rectors?”

“And who sat up there?” This is a question often received in reference to Old North’s upper gallery. From the lower level, the pews above seem miles away; a looming set of white rows disconnected from the world below. This observation, perhaps, points directly to the answer of who occupied those pews.

THE GALLERY — THE HUMPHRIES FAMILY

Of all the Black congregants who worshiped at Old North, the Humphries family’s name appears the most in church records. Their story sheds some light on the experiences of Black congregants but leaves us still with many questions.

THE GALLERY — THE CRANKEY FAMILY

The story of this free Black family offers a glimpse into three generations worshiping at Old North.