One of the ministers to preach from this wine glass pulpit was Rev. William Croswell. Church historian Mary Babcock described Croswell as “the very pulse of the machine…animating and vitalizing the whole fabric from bells to altar.” But while other Old North ministers have become well-known leaders in the history of the Episcopal Church, Rev. William Croswell has faded into obscurity. Why then is he not remembered the same way?

A modest man with a self-effacing sense of humor, Croswell distinguished and endeared himself to the congregation of Old North through his hard work and dedication to the church. Rev. Croswell became rector of Old North in 1829 following the resignation of Rev. Asa Eaton, Croswell’s mentor and friend. At age 25, Old North was Croswell’s first assignment, and to follow in the footsteps of the esteemed Rev. Eaton must have seemed a daunting task.

However, Croswell left his own mark on the church. He was a lover of music, knowledgeable in bell ringing, and composed a number of hymns to be sung at Old North. But perhaps one of Croswell’s greatest legacies was his poetry. In the many poems penned throughout his life, Croswell shared observations of the world around him and leaves us with a glimpse of the remarkable, yet humble, man behind them.

Croswell was genuinely committed to service and helping those in need. In 1833, he with three other Anglican ministers, hosted Rev. William Levington (the third African American ordained to the Episcopal priesthood in America) to speak at Old North and raise money for his church and school for free Black children in Baltimore. In 1845, Croswell became the founding minister of the Church of the Advent, the first Anglican church in Boston to not require pew purchase. This fulfilled a lifelong desire to minister to the poor, and he held this position until the end of his life in 1851.

During his lifetime, he composed nearly 35 sonnets and seventy poems. Below is an excerpt from a poem he wrote about Old North Church a few years after leaving. The poem was intended to be part of a collection for the children at Old North’s Sunday school. 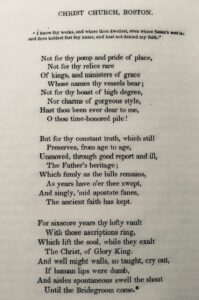