Illuminating the Unseen is a video series produced by Old North Illuminated that studies the histories of Black and Indigenous peoples. Written and presented by our Research Fellow, Dr. Jaimie Crumley, the series dives into Old North’s archival documents to shine a light on those who have often been excluded in the church’s broader historical narrative.

In each episode, Jaimie shares primary source documents that she has been looking at and walks viewers through her process for sussing out the secrets they might contain. The documents appear on the screen and on our website, so everyone has a chance to follow along and do their own historic interpretation. Check out the episodes below! 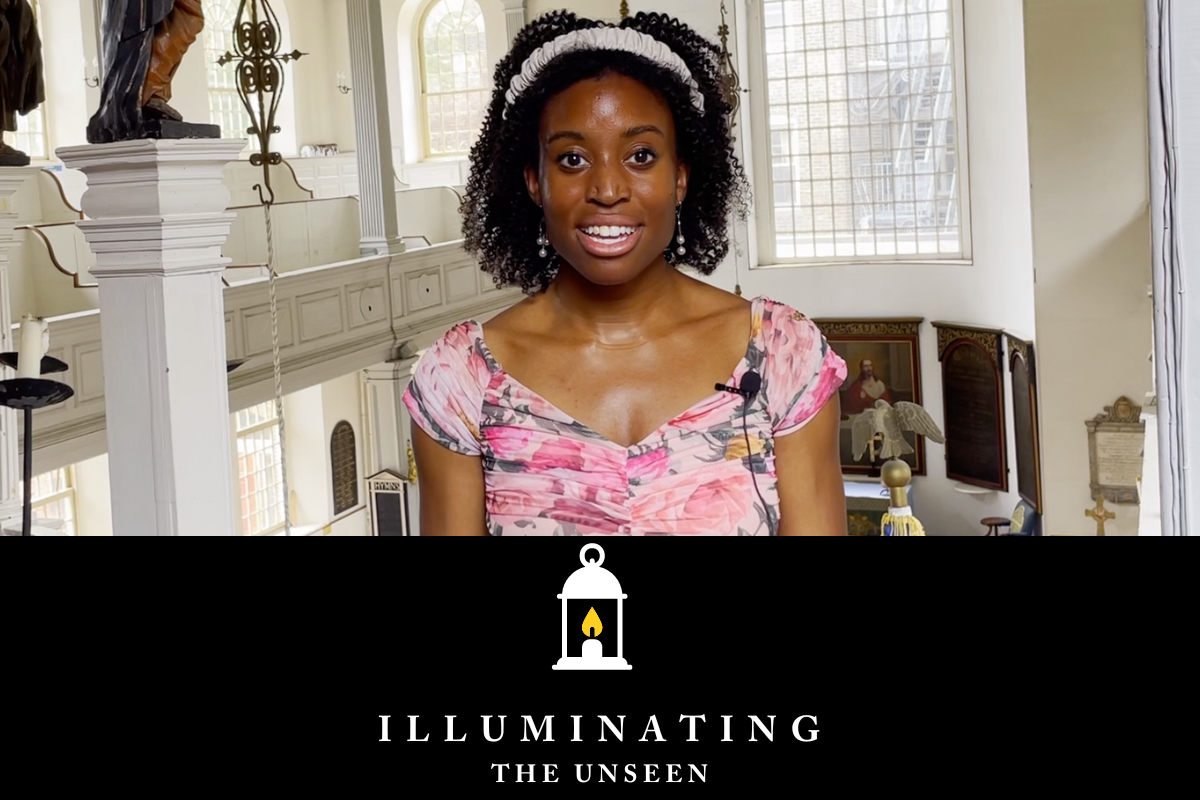 Welcome to Illuminating the Unseen

Dr. Jaimie D. Crumley, an intellectual historian of race, gender, and religion in eighteenth and nineteenth-century New England, is Old North’s Research Fellow. In the video series, Illuminating the Unseen, she walks you through her sources and methods as she shines a light on the stories of some of the Black and Indigenous Bostonians who have affiliated with Old North and the North End neighborhood throughout its storied history. Jaimie analyzes church records and other archival sources that are as varied as pew deeds, wills, letters, Books of Common Prayer, and newspaper articles with an eye toward the people who might be overlooked in the dominant story the source tells. If you want to see Old North Church’s records for yourself, they are housed at the Massachusetts Historical Society in Boston and available for researchers by appointment. Join us as we “illuminate the unseen,” tend to the past, and work toward a more equitable future.

See the episode transcript and learn more about Jaimie.

Our Approach to Illuminating the Unseen

The Illuminating the Unseen video series is part of a broader effort at Old North Illuminated to incorporate “hard history” into our interpretation of Old North Church. How do we share Old North Church’s complicated connections to enslavement? How do we deal with the imperfections of people and places? How do we balance truth with visitor expectations as a public history site?

On October 19, 2022, Old North Illuminated hosted a panel discussion to try and answer these questions. The panel included:

Race and Evangelism in the Church of England

In this video, Dr. Crumley analyzes Old North’s baptismal records from the colonial period. She focuses on the 1733 baptism of an Indigenous woman named Elizabeth. Jaimie discusses the unique challenges Indigenous women and girls in Massachusetts faced in the years before the American Revolution. In her baptismal record, Elizabeth is listed as “Elizabeth, an Indian.” Without a family surname or any context about the people and places to and with whom she related, it is difficult to know much about her. Jaimie speculates that since Elizabeth was baptized at Old North, she might have been from Greater Boston, an area the Massachusett people call Shawmut. Jaimie’s analysis in this video is an example of how feminist historians and cultural theorists use scraps of evidence to expand our understanding of the past.

Old North and Enslaved People in the British Colonial Period

In this video, Dr. Crumley analyzes a 1755 Assessor’s Report, a 1925 Boston Daily Globe newspaper article, and the Crequi Family tax records from 1776-1800 to examine Old North’s connections to slavery in New England and beyond. Jaimie explains that historians typically classify places where slavery (unfree labor) is prevalent as either “slave societies” or “societies with slaves.” “Slave societies” are places where the economy relies primarily on the labor/products of enslaved people. “Societies with slaves” are places where the economy does not rely on modes of production that exploit enslaved labor. Boston is generally classified as the latter because most enslaved people in Massachusetts were complementary to household labor. However, Jaimie argues that Old North’s connections with the trans-Atlantic slave trade indicate that slavery was a central part of economic and social life throughout the British Empire, including at Old North. Jaimie shows one of Old North’s connections with trans-Atlantic slavery through the example of Old North Church pew proprietor Francis Crequi.

The Social Construction of Race in Early Massachusetts History

In this video, Dr. Crumley explores race as both a social and historical construct. When Jaimie describes race as a “social construct,” she means that it is not based in biology. Rather, race is one of many human inventions that we use to justify unjust social relations. When Jaimie describes race as a “historic construct,” she means that the social meaning of race has changed over time. A review of archival documents reveals that race was something that was socially constructed in different ways by different people in eighteenth-century Massachusetts. Jaimie introduces Beulah Speene, a mixed-race woman who married Saul Rogers, an enslaved Black man, at Old North Church in 1767. Speene’s racial journey is a compelling one. Born in Natick, Massachusetts, a town settled by English missionaries for the purpose of converting Indigenous peoples to Christianity, her 1743 birth record indicates that she was not a person of color. However, Old North’s records describe her as a mixed-race woman who married an enslaved man. Decades later, the 1790 federal census data indicates that she, her husband, and her children were free people of color. In this video, Jaimie’s guiding question is: “How does a person, over the course of 24 years, gravitate from seemingly being a white person to becoming a free mixed-race person?”

In this video, Dr. Crumley examines Old North’s records from 1723 –  1795 to track how Black people’s lives changed in Boston throughout the eighteenth century. During the British colonial period, the number of Black people’s names, both free and enslaved, that appear in church records indicates that many of the church’s parishioners were implicated in slavery and brought enslaved people into the life of this church. Black free people also chose to connect with this church, likely to maintain bonds with enslaved people whom they loved. This trend continued through the Revolution. After the Revolution and the abolition of slavery in Massachusetts in 1783, we see a shift. Fewer Black people’s names appear in the church records, which reflects Black Bostonian’s desire for religious autonomy and white Christian’s anti-Black ideologies. One Black person who does appear in Old North’s records after the Revolution is Primus Trask Hall, the son of abolitionist and freemason Prince Hall. Primus Hall’s choice to marry his first wife at Old North in 1784 connects the church to the trans-Atlantic efforts of Black people in the late eighteenth century to liberate themselves from slavery. Relative to other states, abolition happened relatively early in Massachusetts, but archival records reveal that late-eighteenth-century white residents of the Commonwealth, such as Massachusetts Historical Society co-founder Rev. John Eliot and Vice President John Adams,  were largely ambivalent about Black freedom.

In this video, Dr. Crumley examines the efforts of late eighteenth and early nineteenth-century Massachusetts men to urge Indigenous peoples to convert to Christianity. A major player in this mission was the Society for Propagating the Gospel Among the Indians and Others in North America, which was incorporated in Massachusetts in 1787 but functioned earlier without official state sanction. The Society was founded by Congregationalists who were opposed to Anglican missionary work. The Society stated that its primary goal was to “civilize” the Natives, which meant dismantling Indigenous cultural practices by distributing plows and hoes to encourage land cultivation, giving out instructional books, and building schools. The Rev. John Eliot, a Congregational minister at the New North Church in Boston’s North End, was a founding member of the Society and worked with the organization for its first 20 years. The Society, a Congregationalist group, competed with a similarly named Anglican organization, the Society for the Propagation of the Gospel in Foreign Parts, which was aligned with the Old North Church. In the nineteenth century, however, missionary groups became less competitive across denominational lines and even worked collaboratively to force Indigenous and Black people to conform to the American way.

Paul Revere’s Ride and the Mark of Urban Slavery

In this video, Dr. Crumley explores an often-overlooked detail of Paul Revere’s ride. In a letter recounting his historic midnight mission on April 18, 1775, Revere mentions that he “passed Charlestown Neck and got nearly opposite of where Mark was hung in chains.” The aforementioned Mark was a thirty-year-old enslaved man from Barbados. His enslaver was thirty-six-year-old John Codman of Charlestown. On September 18, 1755, Mark was hanged for allegedly poisoning Codman. Mark claimed to have conspired with two enslaved women, Phillis and Phebe, to poison his enslaver. Mark’s Last & Dying Words, in which he urges other enslaved people to “shun their vices” and laments his failures to submit to God, were printed and sold next to the prison on Queen Street in Boston. Both Mark’s hanging body and his last words were used as a somber warning of the cost of resistance. The memory of Mark’s body, and its appearance in Paul Revere’s account of his ride, is a reminder of the role of violence against people of African descent in the making of this new nation. Mark’s story also reminds us that while some white Americans were resisting British authority in the colonies, enslaved people throughout the Atlantic World were likewise demanding their freedom through actions big and small.