Have you heard someone say, “Perhaps I’ll quit my desk job, buy a small farm in the country, and spend my days tending to chickens, gardening, and baking pies”? According to NPR and the Washington Post, this is a twenty-first-century phenomenon: twenty and thirty-something millennials seeking out organic, sustainable food and escaping exorbitant housing costs. However, almost a century ago, in 1927, 36-year-old Gertrude Bibbey did just this. In fact, much of her life as a single working woman and entrepreneur was progressive. 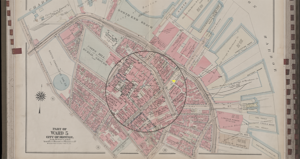 Gertrude had an urban upbringing. She was born in the North End of Boston in 1891. Her parents were English and Scottish immigrants and her father worked as a rigger. The family lived a two-minute walk from Old North Church at 7 Vernon Place, a now-defunct street between Charter and Commercial Streets. Typical to the North End in the 19th century, their Vernon Place neighbors were almost exclusively Irish immigrants who also worked as mariners or as laborers. As was also the norm, the family moved to Roxbury shortly after Gertrude was born, making way for the influx of Jewish and Italian immigrants. 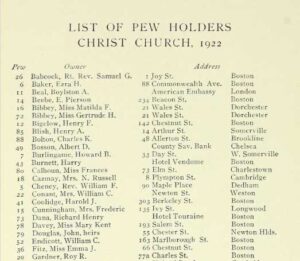 In 1905, aged 14, Gertrude finished her formal schooling. At a time when marriage and domesticity were considered the norm for women, she instead returned to the North End as a stenographer on Commercial Street and lived as a single woman in Dorchester and later Melrose with her sisters. Outside of work, she and her elder sister, Matilda actively participated in the Old North Church community as choir singers, pew owners, and members of the Women’s Guild. Specifically, Gertrude served on Guild committees that led efforts to decorate the church for Christmas and host an annual preserve sale. In 1921, the names of three of Gertrude and Matilda’s nephews were included on the First World War service plaque erected in the church’s vestibule: William Henry Bibbey, John Daniel Chequer, and Albert Irving Derby. During this time, Gertrude befriended fellow guild member and choir singer Florence Gordon with whom she also socialized outside of the church.

After the SuperSpeed Belting Company closed in 1927, Gertrude was unemployed. Instead of acquiring a new desk job in the city, she used her savings to buy Bonniecroft, the two-acre New Hampshire chicken farm where she boarded in the summers. At this time, raising poultry for meat and eggs was transitioning from a domestic undertaking to a commercial venture and Kingston, New Hampshire was a hub. The opportunity appealed to Gertrude as she could work for herself, but it also meant going without modern conveniences of electricity and running water.

Her long time friend Florence became her partner, and for ten years they successfully raised gardens and chickens by the hundreds. They sold eggs, meat, and preserves locally but also set up a recurring direct mail service that presumably used the nearby Boston-Maine Railroad to sell to their former colleagues in Boston at a top price, much like today’s farm-share schemes. The partnership came to a close in 1936 when both women, now in their forties, accepted marriage proposals. They held a joint wedding at Old North Church, after which Gertrude settled with her husband in Connecticut.

Until her marriage in the 1930s, Gertrude’s lifestyle was somewhat controversial. She was one of the many single women working and socializing in Boston whose collective reputation was called into question in the debate over women’s suffrage that raged until its passing in 1919. A decade later, the Boston Globe wrote a feature on Gertrude and Florence’s farm. The reporter exclaimed that the women were “making their livings…without a man on the place” and described them as “modern” and without “an old fashioned bone or muscle in [them].” Old North Church’s archives and other public records do not provide any insight into Gertrude’s opinions on the matters of the day or how actively she supported these causes. Regardless of Gertrude’s individual opinions, through the lens of today, her efforts went a ways toward challenging the status quo and normalizing the roles of women in the workplace and as entrepreneurs.

*Note to reader: Having trouble finding pew #72 in the church? The configuration of the church has changed a number of times although the current configuration was in place in 1922 when Gertrude owned this pew. On the ground level, pews number 1-66, and previously pew numbers through 96 could be found on the gallery level. Unfortunately, visits to the second-floor gallery are prohibited except on a guided tour.