“With an extension of her allusion religious activities can be seen as a means used by New England women to define self and find community, two functions that worldly occupations more likely performed for men.” – Nancy F. Cott, The Bonds of Womanhood

Forever stamped on the brass plate of Pew No.8, the name Mary Gibbs stands out amongst the merchants and sea captains. With a view of the altar better than some men could afford, the question “who is this woman?” begs for an answer.

At a time when gender and wealth determined a person’s social standing, it seems particularly out of place that a woman was able to procure a seat of prominence so early in the church’s history. Perhaps it was religious devotion that drove her to desire such a place in the church, or perhaps it was the chance to publicly display the power she secretly wielded in her home.

For Mary and other women of the colonial period, religion was a way to express the self in a world where the female opinion was often disregarded as simple and unimportant. The public space was not an appropriate venue for the voices of women to be heard, despite what may have been happening in the private home. The church represented a middle ground of sorts; neither the mercantile world of husbands nor the domestic sphere of wives. Women were viewed as being exceptionally pious and their input was more often than not taken into consideration within church communities.

Mary was married to the painter John Gibbs, and she was widowed not long after her husband purchased Pew No. 8. John Gibbs was one of the first vestry members and contributed a significant amount of time to the painting of the church before his death. Gibbs had an established relationship with the church’s first reverend, Dr. Timothy Cutler. In his will, Gibbs stated that Reverend Cutler was to receive 10 pounds of the estate, while his four children were only to receive 5 pounds. 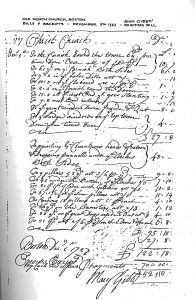 The preconceived notion that women were not suited to the demands of handling estates remains just that. Mary was named sole benefactor and executor of the will, most likely due to the fact that she was well accustomed to handling her husband’s accounts. Church records indicate that Mary documented the contributions of her husband to the church and signed off on all of the bills and receipts. She followed up on debts and made sure that her husband was paid what he was owed. Managing an inheritance was simply second nature to her.

There is no doubt that Mary was a devout woman who valued church participation. Her purchase of the pew emphasizes the rare opportunity for a woman to publicly display her independence and wealth.