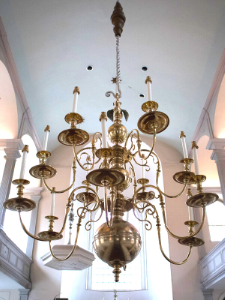 In the center aisle of Christ Church (Old North) hang two ornate brass chandeliers, gifts to the church by one of its members, Capt. William Maxwell. They were first lit on Christmas Day in 1724.

For many of us living here in New England today, December is a month filled with holiday cheer. However, during the colonial era, the holiday was banned by the Puritans. It was illegal to celebrate Christmas in Boston between 1659 and 1681. The ban was finally revoked by English appointed Governor Edmund Andros, but staunch Puritans continued to regard the day as an abomination. Later, eighteenth-century New Englanders viewed Christmas as the representation of royal officialdom, external interference in local affairs, dissolute behavior, and an impediment to their holy mission.

On May 11, 1659, the Massachusetts General Court enacted a law by which, “Anybody who is found observing, by abstinence from labor, feasting or any other way, any such days as Christmas Day, shall pay for every such offense five shillings.” The General Court stated the ban was needed “for preventing disorders, arising in several places within this jurisdiction by reason of some still observing such festivals as were superstitiously kept in other communities, to the great dishonor of God and offense of others.”

Although Christmas was widely celebrated in Europe as a Christian holiday marking the birth of Jesus Christ, the Puritans saw it as a false holiday with stronger ties to Paganism than Christianity. In the fourth century, the Catholic Church created an official day for the celebration of Christ’s birth. The date that the church chose coincided with already existing celebrations of the Winter Solstice. The ancient Romans called their festival Saturnalia, in honor of Saturn, their God of agriculture. Gifts were exchanged and homes were opened to friends and family for a celebration.  The customs that had been part of the ancient Roman holiday eventually became part of our Christmas celebrations.

Although Christmas celebrations were legal after 1681, New England officials continued to frown upon gift giving and reveling.  While the Puritans chose not to celebrate Christmas, members of the Anglican community did. King’s Chapel was Boston’s first Anglican Church, where Christmas services were held annually from the time of its construction in the seventeenth century. The decorations and music had a holiday appeal, and some of Boston’s young puritans were attracted to it.

Because the Puritans believed in an almost literal interpretation of the bible, they rejected the traditional ecclesiastical calendar followed by the Anglican Church and refused to recognize a large number of Christian feast days including Christmas, Easter, and the Saint’s days. As Judge Sam Sewall, a staunch Puritan noted in his journal, New England settlers “came hither to avoid anniversary days, the keeping of them, such as the 25th of December. How displeasing must it be to God, the giver of our time, to keep anniversary days to play the fool with ourselves and others.” 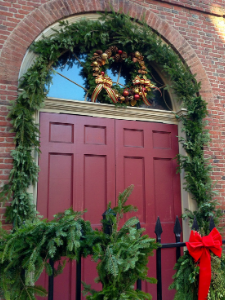 In the 1720s, there had also been a public debate about the celebration of Christmas between the minister of Marblehead’s Anglican church, St. Michael’s, and the minister of the Congregational church, First Church of Christ. On Christmas Day in 1729, The Rev. John Barnard of the First Church of Christ preached a sermon attacking the celebration of Christmas. Nine days later a counter-sermon defending Christmas was read by George Pigot, the rector of St. Michael’s Anglican Church. Christmas was the subject of heated public confrontation in the streets of Marblehead in the 1730s. Some of Rev. Barnard’s Congregation began to confront the town’s Anglicans in the streets with heavy ridicule about celebrating Christmas.

In the early 1800s, a religious revival spurred a renewed interest in Christmas. In 1830, Louisiana was the first state to make Christmas a holiday. Other states followed suit and Christmas became popular again. In 1856, Henry Wadsworth Longfellow wrote, “We are in a transition state about Christmas here in New England. The old puritan feeling prevents it from being a cheerful hearty holiday; though every year makes it so.” Later that year, the Massachusetts Legislature made Christmas an official holiday in the state. In 1870 the US Congress declared Christmas a federal holiday, and Christmas as we know it was here to stay.