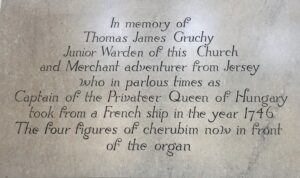 Thomas Gruchy remains an elusive figure in Old North’s long history. Appearing in Boston by 1741 and disappearing in 1759, Gruchy made a small fortune from the sea and purchased a grand mansion within a block of Old North. Church marriage records reveal that Gruchy enslaved a woman named Tamuse, who married a free Black man named Jerremy in 1751. Tamuse likely worked in the Gruchy mansion.

Much of Gruchy’s  life is murky. We know Gruchy was an active and generous member of the congregation. Along with four other Old North congregants, Gruchy invested in the ship Queen of Hungary. With Gruchy as her captain, Queen of Hungary joined King George’s War in 1744 as a British privateer, a civilian ship licensed to hunt enemy merchant vessels for prize.

In 1746, Gruchy captured three French ships en route to French Canada. Among the spoils were four exquisitely carved wooden angels, thought to be carved in Belgium in the 1620s. Upon their return to Boston, Gruchy divided the plunder and presented these angels to Old North Church as a gift. These angels have resided on the balcony rail in front of the organ ever since 1746. 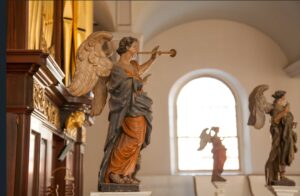