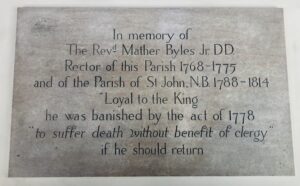 Reverend Mather Byles, Jr. served as the second rector of Old North Church from 1768 until April 18, 1775. Like his predecessor Rev. Timothy Cutler, Byles left the Congregational ministry to be ordained as an Anglican priest. Also like Cutler, Byles was an enslaver. Church records document the baptism of Byle’s enslaved servant Cato in early April 1775.

On the morning of April 18, 1775, Rev. Byles, a loyalist, met with the church proprietors. There were two main issues. First, Byles was rumored to be considering a move to a different church. Second, the proprietors had ceased paying Rev. Byles. Why? In part, it was his politics, but in larger part it was economic. The congregation’s finances were in disarray: many proprietors were unable to pay their pew rents because of the impact of the closure of the port of Boston by Parliament. By the end of the meeting, Byles had handed over his keys.

That same evening, one of the proprietors at that meeting, vestryman Captain John Pulling, Jr. returned to the church with Robert Newman, the church sexton, to hang two lanterns in the church steeple (see pews 50 and 55).

On March 17, 1776, Rev. Byles, his children, and likely Cato, sailed from Boston to New Brunswick, along with the remaining Anglican clergy in Boston, all British troops, and many British loyalists. He left behind his sisters and father. The Banishment Act of 1778 names Mather Byles, Jr. as a person forbidden to return to Massachusetts on pain of death.