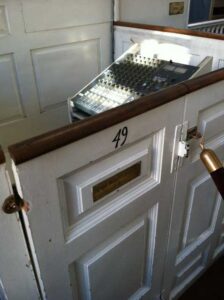 Many visitors chuckle upon seeing the contents of pew 49, pointing to the large 1980s soundboard and mixer that runs the church’s “modern” audio system and proclaiming “Look! The original colonial speakers!” Ironically, these visitors need only look up to find that they are nearly directly below the church’s real audio system: the sounding board.

Appearing to be a miniature, decorative roof suspended above the pulpit, the sounding board is, in fact, a fully functional amplifier without any electronic, mechanical, or moving parts.  While also known as a “soundboard,” the French name “abat-voix” describes its purpose: it “beats the sound down.” The “roof” is actually hollow, and the decoratively carved bottom surface is a thin board that resonates and increases the volume of the sound while simultaneously directing the sound out into the congregation. It is the same technology that allows instruments such as pianos, guitars, and many other stringed instruments to project the otherwise low sound of vibrating strings out across a vast space with great volume. In this case, it is not a musical note that is amplified, but the preacher’s sermon; while the technology has probably existed since the first stringed instruments, the “modern” pulpit made its appearance in the 13th century, complete with a sounding board. The Old North sounding board has a flat bottom, but some churches had slightly cone-shaped, parabolic bottoms to further direct the sound. Even today, many concert halls and theaters are built with special panels over the stage which serves to project sound into the audience, and the “tuning” of such a building is still a highly skilled and vastly expensive endeavor. Combined with the acoustic properties of the sanctuary itself, the sounding board still functions very well today. 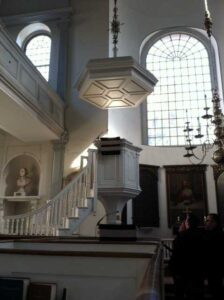 Determining the age of the Old North sounding board is difficult. The interior of the church was renovated many times; indeed, initial construction continued well into the 1740s before the church was “completed.” The first double-decker pulpit from 1723 was temporary, replaced as early as February of 1729; references state that an eight-inch square oak beam was laid across the roof’s tie beams to support the sounding board in December of 1730 to replace the 1724 “canopy.” In 1806 the pulpit and sounding board were replaced and moved to the center of the altar on December 15, only to be moved to a position similar to where they are today in 1812 to allow the new panels depicting John Ritto Penniman’s Last Supper and the Decalogue that was presented to the church by warden Shubael Bell. This third pulpit and sounding board was not our modern one, however, for in 1830 the church authorized “to make such changes in the reading desk as seem expedient” and, after moving the new pulpit and sounding board to the chancel, the church gave the second pulpit to the Episcopal Congregation of St. Paul’s Church in Otis, Massachusetts (along with a crystal chandelier) in September of 1830. In 1860 a proposal was made to move the pulpit and reading desk outside the chancel again; a floor plan from 1884 shows that the pulpit and reading desk were removed to near their present location, but photographs taken after this date show a pulpit without a sounding board.  The current pulpit itself was given in memory of Reverend Asa Eaton, S.T.D, Rector 1805-1829 by his grandson William S. Eaton, according to an inscribed plaque on the pulpit. It was installed during the last major renovation to the church in 1912.

If these renovations sound confusing, the complaints of the 1912 congregation during the renovation will strike a chord. By their own admission, the church records regarding the altar were “baffling,” often with complaints that “mention is made of ‘alterations of the pew, pulpit, reading desk, and stairs’” while Bishop William Lawrence, one of the masterminds behind Old North’s renovations, made a personal effort to locate the pulpit and sounding board gifted to St. Paul’s in 1830 to no avail. Lawrence went so far as to send friends to Otis, where they “took a photograph of the present pulpit, which, alas! turned out to be a modern affair.” Lamenting that the “Christ Church pulpit had doubtless gone to kindling wood long ago,” he had the “modern” 1912 pulpit and sounding board modeled upon the “ancient” pulpit of Trinity Church in Newport, Rhode Island (a similarly aged congregation, whose 1726 building is the oldest in that state and is only a few years younger than the Old North Church).

Lawrence found the original 1730 oak timber for the sounding board, and hung the sounding board from the original hole in the beam, proving himself quite the amateur historian, supported his decision by noting that the sounding board not only matched earlier plans in its location, but that the beam “was pinned to the truss by an oak pin over a foot long, and as pins were not used in any of the alterations, this indicates it’s age as contemporaneous with the erection of the church.”

One would assume that such diligent research would definitively answer any questions about Old North’s pulpits and sounding boards, but questions were raised barely two years after the renovation. On February 14, 1914, One Lillian B. Clark (noted as “Mrs. Albert B.) wrote to Bishop Lawrence “imploring him to believe that the St. Paul’s Church, Otis, Mass. Pulpit ‘is the one’ pulpit from the Old North Church and anxious that ‘all difficulties will be overcome and that the pulpit will be returned to its original church,’ despite the fact that ‘some of the people [in Otis] feel strongly on the subject and will not easily allow that pulpit to be returned to the giver.’” Lawrence noted that Mrs. Clark didn’t seem to realize that he had already conducted an exhaustive survey and, determining the Otis pulpit “modern,” found it “necessary to design a new pulpit.” An upset congregant, perhaps? No, for Mrs. Clark wrote from Lee, Massachusetts, a town in the west part of the state only miles from New York state.

By 1947, the myth that the Otis pulpit was the original second pulpit returned anew. Mary K. D. Babcock, an amateur historian for the church, wrote that the “drab” paint in the Otis pulpit matched the original Old North paint palette stating, “I presume that a committee investigated the pulpit but decided it was not sufficiently beautiful, possibly not authentic, to be returned or copied for Christ Church.” No doubt Bishop Lawrence would have disagreed. But thanks to Babcock’s forceful, if unsubstantiated, claims, the Bishop’s research was ignored and the pulpit was considered “original” until April of 1981 when the Boston National Historical Park undertook a historic structural survey of both the Old North Church and the Otis pulpit. It concluded as Bishop Lawrence did long ago, that the pulpit was not original; dating probably to the 1830s, there is only a mild chance that a portion of the bottom came from an Old North pulpit, but from the third pulpit and second. The Otis reading desk does, however, appear to have a section that may be from the second Old North pulpit, although more recent research suggests this may not be the case.

In any event, the pulpit and sounding board you see today in the Old North Church is the fifth in a series, constructed in 1912 on the plans of a similar colonial pulpit from the 1720s, and despite its “modernity”, it represents the type and construction congregants would have seen within the church when it was built.