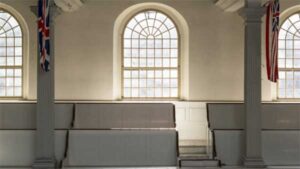 This is a question often received in reference to Old North’s upper gallery. From the lower level, the pews above seem miles away; a looming set of white rows disconnected from the world below. This observation, perhaps, points directly to the answer of who occupied those pews.

The gallery was home to enslaved persons, servants, and free Black citizens who together made up a significant portion of the congregation. In Massachusetts, it is often forgotten that the state was deeply rooted in the slave system prior to 1783 when the Massachusetts Supreme Judicial Court ruled slavery to be unconstitutional. Although differing in some ways from the peculiar institution associated with the American South, slavery was nonetheless an integral part of Boston’s colonial society. Prior to the Revolution, a vast majority of Boston’s elite benefitted from the profits of slave-based industries.

Unlike the first pew owners of Old North, there are no brass plates commemorating their existence. A few baptism, marriage, and burial records document an enslaved person or servant’s name, along with the enslaver’s name and the date on which a service was performed. These documents tell us little about the kind of lives this group of people led, but they do serve to reinforce the colonial perception of people of color. Congregants were expected to baptize their enslaved and servants in order to humanize them, making them suitable residents in their homes and businesses. Religious leaders often felt the tensions between humanizing the enslaved and maintaining social order. It was common for church leaders to promote the idea that spiritual freedom was not directly related to physical freedom, thus preventing any possible insurrections and demands for liberation.

Although they were required to attend church with their enslavers, enslaved people and servants were expected to remain a respectful distance apart while walking to church and during the service. The gallery was a way for enslaved people and servants to hear the sermons but remain out of sight and out of mind. Even though the upper level is an intriguing part of the church today, it was far from an ideal seat. Coldest in the winter and warmest in the summer, the gallery offered little comfort to those sitting there.

Not all of the gallery occupants, however, were there because they were enslaved or employed by a congregant. Elizabeth Humphries and her family were free Black citizens who chose to attend Old North. Humphries baptized her children at the church between 1749 and 1750, but no record exists of her family in conjunction with a white congregant. It is interesting to consider why she chose Old North specifically. Research shows that many Boston enslaved people originated from the Caribbean and other British colonies, where they were exposed to the Anglican faith. It is possible to hypothesize that she was from the Caribbean and perhaps felt some sense of connection and community. Without the documents to prove it, historians will never truly know her history or motivations, leaving her with the others to remain but a name on a page.

Research on this topic would not have been possible without the work of Dr. Chernoh M. Sesay Jr.