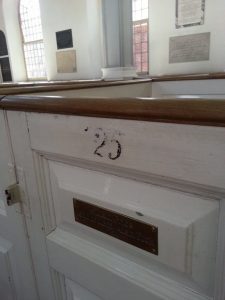 Capt. Daniel Malcolm was born in Boston in the 1720s. He lived on Fleet Street and attended the Old North Church. He served as a Junior Warden and owned two pews, #4 and #25, during his lifetime. He had a reputation for being a smuggler by British authorities.

On Sept. 24, 1766, Deputy Collector of Customs William Sheafe paid a visit to Capt. Malcolm at his home on Fleet Street with a writ of assistance. Sheafe claimed to have received a tip from an anonymous informer that Capt. Malcolm was storing wine, on which he hadn’t paid taxes, in his cellar. Capt. Malcolm met Sheafe at the door with loaded pistols in each hand and a sword at his side, informing Sheafe that he would not be allowed into his home to search for the wine. Sheafe later testified that Malcolm stated that if any man attempted to search his property, he would “blow his brains out.” Sheafe and the Sheriff wisely left and later returned with a search warrant signed by Judge Foster Hutchinson (younger brother to Lt. Governor Thomas Hutchinson).

When they returned later in the day, there was a crowd of over two hundred men and young boys surrounding Capt. Malcolm’s property and preventing them from entering his home. Capt. Malcolm informed them that they would not be allowed to enter his cellar until they identified the informer by name.  The men refused and retreated without searching the property. A few weeks later, Attorney and Solicitor General of the Realm William Degrey stunned the customs officials by denying the validity of the writ of assistance in the American colonies on the grounds that acts of trade did not extend the Court of Exchequer (an English civil court where Crown revenue cases were tried) to the American colonies. The charges against Capt. Malcolm were later dropped.

Capt. Daniel Malcolm died October 23, 1769, and is buried at Copp’s Hill Burying Ground across the road from Old North. Because of his reputation as a smuggler, he wasn’t well-liked by the British authorities and before he died, he requested that his body be buried ten feet below ground to make it difficult for his enemies to disturb his remains. On his tombstone, his epitaph reads:

Here lies buried in a stone grave 10 feet deep, Capt. Daniel Malcolm, Merchant who departed this life October 23rd, 1769 age 44 years.  A true Son of liberty. An enemy to oppression and one of the foremost in opposing the revenue acts on America. 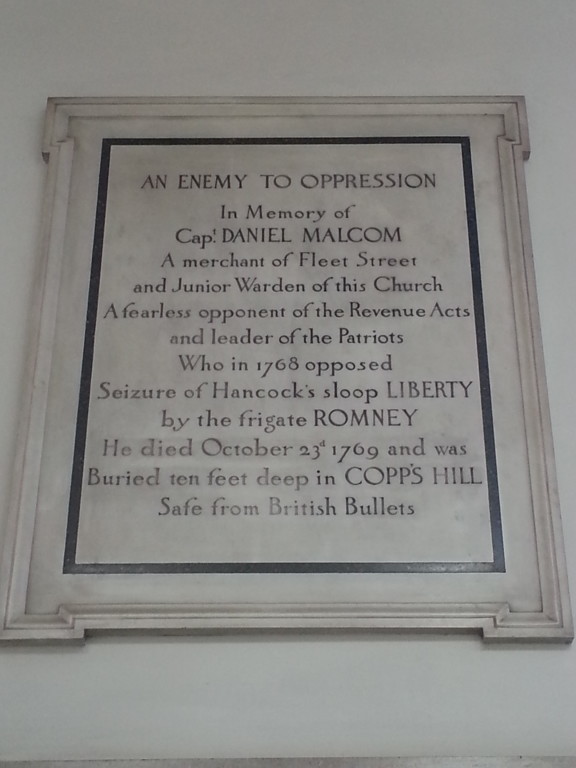 During the occupation of Boston, British troops used Capt. Malcolm’s tombstone for target practice. Over 200 years later, visitors to the cemetery can still see where the musket balls penetrated the tombstone. In 1875, poet Oliver Wendell Holmes immortalized Malcolm by mentioning him in a poem he wrote for the 100th anniversary of the Battle of Bunker Hill, entitled “Grandmother’s Story of Bunker Hill Battle as She Saw it from the Belfry.” Capt. Malcolm is mentioned in lines 66 and 67: “Oh fire away, ye villains and earn King George’s shillings, but you’ll waste a ton of powder afore a rebel falls; you may bang the dirt and welcome, they’re as safe as Daniel Malcolm, ten-foot beneath the gravestone that you’ve splintered with your balls!”

Visitors to the Old North Church can also read this memorial plaque dedicated to Capt. Malcolm inside the church.