During his lifetime, when he was not out at sea, Capt. Samuel Nicholson attended Old North Church and owned Pew #11. After he died, he was buried in the Old North Church crypt. Visitors may now visit the crypt on  Behind-the-Scenes Tours or view the plaque given to the church by the US Navy in Nicholson’s honor. Sailors from the USS Constitution still visit the church today to pay homage to Capt. Nicholson.

Who was he and what did he do?

Samuel Nicholson was born in Chestertown, Maryland in 1743. Like his father before him, Nicholson went to sea as a young man. Before the American Revolution, he captained a number of merchant ships. In December of 1776, the Continental Congress commissioned him as a captain in the Continental Navy. In January of 1777, Nicholson was placed in charge of his first ship. It was named the USS Dolphin. After the vessel was damaged in battle, Nicholson was put in charge of the frigate USS Deane. In June of 1782, Nicholson was accused of mistreatment and poor leadership by one of his officers. A Court of Inquiry was held, and although Nicholson was found guilty of the charges, the charges were later dropped when Nicholson complained that proper procedures were not followed during the inquiry. Perhaps because of his difficulty getting along with his fellow officers, he was later relieved of his command of the USS Deane. Nicholson later requested a court-martial to clear his name. His court-martial was held in September of that year and he was acquitted of the charges.

After the United States won its independence, Congress, lacking the authority to impose taxes under the Articles of Confederation, was too weak to maintain an army, much less a navy. The nation’s military weakness convinced American nationalists of the necessity of adopting a new constitution that would increase the authority of the national government. The U.S. Constitution, ratified in 1789, gave Congress the power to raise money to establish a navy.

With the start of the French Revolution in 1793, warships of France and Great Britain began interfering with American trade with their enemies. Another threat to American commerce came from corsairs of North Africa’s Barbary Coast. In response, the Continental Congress passed the Naval Armament act of 1794. The USS Constitution was one of six frigates that Congress requested be built in 1794 to help protect American merchant fleets from attacks. It was constructed in Boston, and the bolts fastening its timbers and copper sheathing were provided by Paul Revere. Samuel Nicholson came out of retirement and was appointed naval inspector and supervised the construction of the frigate USS Constitution. The vessel was designed by Joshua Humphreys and built at Hart’s shipyard in Boston. It was launched in September of 1797. Samuel Nicholson was later assigned to the ship as its first Captain. 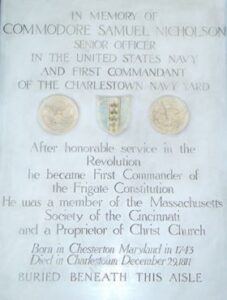 In July 1798, the USS Constitution sailed for the West Indies, protecting U.S. shipping from French warships. Captain Nicholson captured the British privateer, The Niger, off the coast of North Carolina, which he mistook for a French vessel. (It turned out to be sailing under orders by the British.) The ship and its crew were later released. In January 1799, Capt. Nicholson and his crew captured the Spencer, an English vessel, which had been legally captured by French privateers.  The next day, Capt. Nicholson released the vessel and its crew. Shortly after this, Nicholson was relieved of his command of the USS Constitution. In 1800, Nicholson was appointed to serve as the first superintendent of the Charlestown Naval Yard. He died on December 28, 1811, at the age of sixty-eight.