Robert Newman is perhaps the most famous sexton ever to serve Old North due to his participation in the fateful events on the night of April 18, 1775. 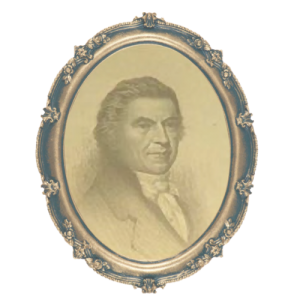 Robert Newman was born on March 20, 1752 in Boston. He had an interesting and complex family tree. Robert Newman’s great-grandfather, Rev. William Burroughs, was accused of witchcraft in 1692 and hanged in Salem. After the death of his father when he was only two years old, Newman’s mother, Mary Thomas*, married John Gibbs of Christ Church, whose former wife was the daughter of the Rev. Timothy Cutler (the first rector of the church). His brother was the organist at the Old North Church, and his cousin, Isaiah Thomas, was a Boston printer. Newman became sexton of Christ Church in 1772. He owned Pews #50 and #78.

In the spring of 1775, Newman lived at home with his mother in a house on the corner of Sheafe Street and Salem Street. She rented part of her home to British officers during the occupation of Boston, as was common for many families. On the night of April 18, 1775, Newman pretended to retire to his bedroom to go to sleep, but instead, he snuck out of his house and met up with Old North vestryman Capt. John Pulling, Jr., and Thomas Bernard, at the Old North Church. By request of Paul Revere, Newman and Pulling were to carry signal lanterns to the top of the Old North Church steeple and place them in the windows while Bernard stood outside as a lookout. These signal lanterns sent an incredibly important message across the river.

Paul Revere had told Col. Conant and some friends in Charlestown to keep an eye on the steeple of the church and to wait for a signal. They were told that if they saw one signal light, the British troops were leaving Boston by land via the Boston Neck, and if they saw two lights, the troops planned on rowing across the Charles River to Cambridge before marching to the countryside. Their orders were to seize and destroy munitions that the colonists had been illegally stockpiling in Concord. After receiving the signal for which route the British soldiers were taking, riders would then alarm the countryside.

Legend has it that after assisting with the signal lanterns, Newman escaped from the church by climbing out a back window on the ground floor of the church and sneaking back into his home to sleep. The next day, British troops arrested Robert Newman and placed him in jail since he was one of few people in town with a set of keys to Old North. He was later released after he told them that he had lent Capt. Pulling the church keys. When the authorities went looking for him, they discovered that Pulling had fled Boston.

*Robert Newman’s mother, Mary Thomas, who married a John Gibbs in 1755, is NOT the same Mary Gibbs who owned Pew #8.

Joseph Warren Revere, son of Paul Revere, attended the Old North Church in the early 19th century. He sat in Pew #54 with his…