In the spring of 1768, John Hancock’s vessel, the Lydia, pulled into Boston Harbor after a transatlantic voyage. Suspected of smuggling tea and other cargo, the vessel became a target for two customs officials, Owen Richards and Robert Jackson. When the captain of the vessel informed John Hancock of their arrival, he instructed the captain to keep the men from going below deck. Richards and Jackson left after being refused access below deck.

However, later that evening, the two men returned to the Lydia and snuck aboard to look around. Informed of their return visit, Hancock confronted them both and asked to see the legal documents that allowed them to search the vessel. Because the documents did not contain a specific date for the search, Hancock considered them invalid and ordered his crewmembers to escort the men off the vessel. The customs commissioners dropped the matter but kept their eye John Hancock. They knew that he was smuggling goods into Boston aboard his vessels, and they would eventually catch him in the act …

Owen Richards, one of the customs officials with an eye on Hancock, was born in Wales and arrived to the American colonies in the 1740s. He married Rebecca Sampson of Boston and owned pew #75 at Old North Church. He attended Old North with his wife and their four children. A staunch Loyalist, Richards’ fate in Boston did not bode well.

Customs officials made their move against Hancock less than a month after the Lydia incident when another one of his vessels sailed into Boston Harbor. Richards and another customs agent Thomas Kirk headed for the harbor and straight for Hancock’s vessel, the Liberty. Shortly after they boarded the vessel, Captain Marshall confronted the men aggressively. Kirk was taken hostage and held in a cabin below deck while Richards escaped. During Kirk’s containment, other crewmembers emptied cargo from the vessel of the suspect. Kirk was eventually released. He returned to the customs office and at first informed his superiors that he didn’t find any contraband cargo. However, before he was released, Capt. Marshall had threated physical harm if Kirk pressed charges against him.

Perhaps due to the stress of unloading contraband cargo and dealing with a persistent customs official, Capt. Marshall died of heart attack shortly after the incident. Then Thomas Kirk changed his story. He informed his superiors that he had been taken hostage and the cargo was removed from the vessel. Thomas Kirk’s boss, Joseph Harrison, Collector of the Port, presented Kirk’s confession to his superiors. The confession was used as grounds for seizure of the Liberty for smuggling.

Customs officers were ordered to make the seizure. To avoid the possibility that the townspeople might rescue the vessel, they enlisted the help of the British Navy. Crewmembers of the HMS Romney took hold of the Liberty from Hancock’s Wharf and towed it to the outer harbor where they secured it next to a British vessel. 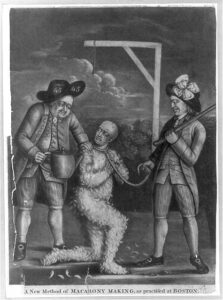 A riot broke out in the streets of Boston soon after the Liberty was seized. Several customs employees were roughed up and their homes vandalized. Fearing further attacks, many of them relocated to Castle Island. Charges of smuggling were later brought against Hancock and he was found guilty. The punishment was the forfeiture of the ship. The British government later used the Liberty to chase down American vessels attempting to smuggle goods into the American colonies. In 1769, an angry mob seized it and set it on fire in Rhode Island.

What about our pew owner Richards? In May of 1770, Owen Richards boarded yet another ship in Boston Harbor for inspection and discovered that the captain was attempting to smuggle sugar into Boston without paying taxes on it. He reported his findings to his superiors and the vessel was seized by the British. Once word spread throughout Boston that Richards was once again responsible for the seizure of another vessel, the Sons of Liberty made a visit to his home in the middle of the night. They kicked in his door, dragged him out by his feet, and stripped him naked before tarring and feathering him for being an informer. Fortunately, he survived.

Owen Richards was one of about two dozen men who were tarred and feathered in Boston in the 1760s and early 1770s. In 1771, Richards hired attorney Samuel Fitch to sue some of the men involved in his torture.  Charges were filed against Joseph Doble, a mariner, and Joseph Akley, a wigmaker, for assault and battery, destruction of personal property, and theft of money/valuables. Doble and Akley were both defended by John Adams.*

Richards later moved to Marblehead after the port of Boston was closed by the British in 1774 and worked at the Customs House in Salem. He lost his job shortly after the Battle of Bunker Hill and remained in Massachusetts until 1778 when his name was added to the Banishment Act of Massachusetts. Several hundred British loyalists living in Massachusetts were ordered to leave that year. He first relocated to Halifax with other Loyalists and eventually sailed for England leaving behind his wife and four children in Boston.

In 1784, Richards appeared before the Loyalist Compensation Board and asked to be compensated for his losses back in Boston. The Board repaid him for the cost of his home and furniture and provided him with an annual allowance of thirty British pounds a year. He received the allowance until his death in the early 1800s. He never returned to America and he never saw his wife and children ever again.

*A previous version of this article incorrectly stated that John Adams represented Owen Richards in the suit.