Join us for a two-part blog series based on research by Fall 2022 Old North Illuminated Research Intern, Lee Parker. Here in part one, you will learn about the people who contributed to helping the Old North Church rebuild its steeple after Hurricane Carol felled it in 1954. Discover how efforts to rebuild the famed steeple catapulted the church into the national debate about stopping the spread of Communism, defending civil liberties, and historical memory.

In part two, you will meet the Episcopal vicars (ministers) Rev. Charles Peck and Rev. Howard Kellett who served the Old North Church during the steeple fundraising campaign. Learn how they felt about some of the political concerns of the 1950s and what they did to lead Old North through a period of uncertainty.

When Old North’s vicar, Rev. Charles Peck, remembered the afternoon of August 31, 1954, he described the weather as “oppressive.” He explained that “the windows rattled. The darkness deepened. The police appeared and roped off the street in front of the church. At that time, the steeple rocked far out of plumb-but it did not fall . . . As gusts as much as 75 miles an hour increased, the steeple shook and moved . . . At last, it came. With the force of one of the strongest gusts (85 miles an hour?) the wooden steeple could take no more. We heard above us violent and excruciating noises as the wooden steeple parted company with its base . . . It was falling.”1

No lives were lost, but Hurricane Carol did considerable structural damage to the Old North Church. The cost to rebuild the steeple was roughly $150,000, around $1.8 million today.2 This was the second time that Old North’s steeple was assailed by a storm. The church’s original steeple fell in 1804 and was rebuilt to resemble other nineteenth-century steeples.

While the loss of a second steeple was devastating for the congregation, it also presented an opportunity to build a third steeple that would be a visual reminder of the church’s historic contributions to the American Revolution. Nearly two hundred years before that stormy August afternoon in 1954, a North End resident named Paul Revere was summoned by Dr. Joseph Warren who asked him to travel to Lexington to alert the people there about the movements of the British soldiers stationed in Boston. According to Revere’s recollections of the evening of April 18, 1775, he asked an unidentified friend, whom we believe was Old North’s sexton Robert Newman, to hold two lanterns in the church’s steeple as a signal to Revere’s comrades that the British troops approached “by sea” across the Charles River. Newman was joined that night in the steeple by Old North vestry member Captain John Pulling Jr.

Old North’s steeple became a symbol of American liberty when, in 1860, abolitionist and poet Henry Wadsworth Longfellow wrote the poem “Paul Revere’s Ride” after his visit to the church. Longfellow wrote the poem as a clarion call to those who shared his political vision. He urged them to honor the spirit of Revere’s ride by defending the union as the nation moved toward Civil War.

Raising Funds for a New Steeple

Seizing upon the church’s status as a symbol of American patriotism, the congregation hoped that the design of the third steeple would resemble that of the first. To raise the money to build the third steeple, the church enacted a nationwide fundraising campaign appealing to churches, historical societies, schools, and private donors. They made their appeals through personal correspondence, television appearances, and radio broadcasts.

Below, you can watch a 1955 news story about Old North’s weather vane being displayed at the Republic Bank of Dallas as part of a fund drive to finance the replacement of the church’s steeple. The video has no audio, but the script is available online.

People of all ages participated in the fundraising campaign to rebuild the Old North Church steeple. Many of the donors were American Christians who wanted to support a congregation in need, as they hoped other Christians would support their church in times of need. Other donors had learned about Paul Revere’s historic ride and wanted to play their part in American history by supporting Old North. 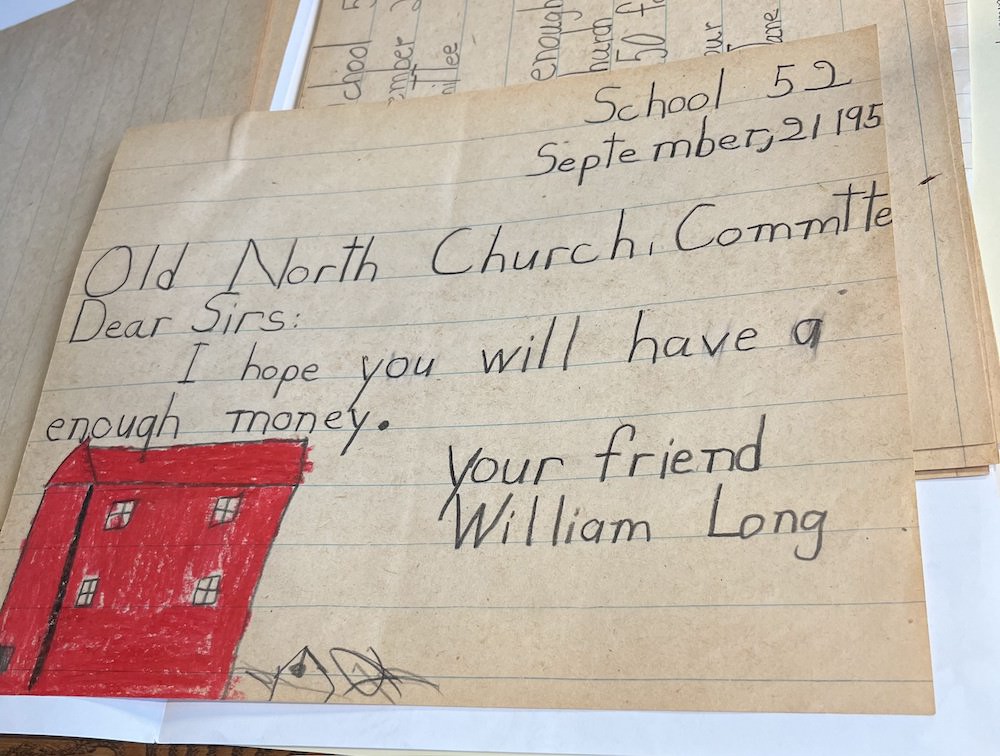 Other donors were more politically motivated. They were anxious about the spread of Communism in the 1950s and believed that by supporting American democracy, they could combat it. Others were concerned about infringements on the rights of Jewish and Black people and believed Old North’s history was a reminder of the urgency of protecting the civil rights of all people regardless of their race or religion.

Old North’s steeple fell during the first decade of the Cold War. The Cold War began in 1945 after the alliance between the Communist Soviet Union and the capitalist United States and Great Britain deteriorated. While the Cold War did not end until the Soviet Union fell in 1991 under the leadership of Soviet leader Mikhail Gorbachev, the conflict was at its peak from 1948-1953, and again from 1958-1962.3 Old North’s fundraising campaign occurred in the midst of this global conflict.

In the United States, anti-Communist fears played out in a phenomenon called the Red Scare. The Red Scare was a campaign to rid the nation of Communists and Communist sympathizers. President Harry S. Truman’s opponents believed that he had allowed Communists, whom they called “the reds,” to infiltrate the government. Senator Joseph R. McCarthy of Wisconsin led the charge, arguing that the Roosevelt and Truman administrations had amounted to “twenty years of treason.”4 Although most of McCarthy’s claims were baseless, he enjoyed a successful political career and impeded the personal lives and careers of many government officials, intellectuals, teachers, and journalists who were the victims of his relentless efforts. McCarthy did not work alone. Some groups argued that the United States was a Christian nation and that the Soviet Union was a godless one. The addition of the phrase “under God” to the United States pledge of allegiance in 1954 was, in part, an attempt to link American patriotism and Christian zeal.5

When Old North’s steeple fell in 1954, some donors connected the steeple’s history to the simultaneous anti-Communist wave of American patriotism and Christian nationalism. In Boston, Cardinal Richard Cushing, a Catholic priest who was the Archbishop of Boston from 1944 until 1970, produced an anti-Communist pamphlet that was distributed to high school students in 1959.6 Cushing’s pamphlet attracted the attention of the American Civil Liberties Union (ACLU). The ACLU objected to such publications and argued that they harmed civil liberties by introducing religious teachings into public educational institutions.

Although Cushing was a Catholic priest, he was friendly with Rev. Howard P. Kellett, the Episcopal vicar of Old North Church from 1956 until 1971. In November 1965, Kellett invited Cushing to speak at the commemorative lantern ceremony at Old North.7 Although Kellett’s theology was less conservative than Cushing’s, the invitation reflects Kellett’s well-documented reputation for forging alliances with other Christian ministers from all sects.

Although many Americans supported efforts to curb the so-called spread of Communism during the 1950s, some argued that the extreme measures McCarthy and his allies employed violated civil liberties and civil rights. Civil liberties are the freedoms guaranteed by the United States Constitution. Meanwhile, civil rights are claims that are based on legislation and are not guaranteed by the Constitution.8 In the 1950s, race and religious liberty emerged as central political issues. The 1954 Brown v. Board of Education decision integrated public schools in the United States. The 1955 bus boycott in Montgomery, Alabama, led by Rev. Dr. Martin Luther King, Jr., showed the nation that Black Americans would not be silent in the face of anti-Black racism.9 Meanwhile, because World War II had decimated Jewish populations in most European countries, the United States emerged as a place where Jewish people could live without fear. In the late 1940s, Jewish Americans rallied to support the State of Israel, defend themselves against antisemitism, and succeed in the United States.10

After Hurricane Carol, two Boston-based groups that drew on America’s revolutionary heritage to defend the importance of civil liberties were the Americans for Traditional Liberties and the Jewish Community Council of Metropolitan Boston. Americans for Traditional Liberties collaborated with Jewish organizations to promote their view that civil liberties and civil rights were two of the most important aspects of American identity. Some Jewish Americans linked Jim Crow racism and the persecution of Jewish people during the Holocaust. In a 1950 article, Robert C. Weaver, a former member of President Franklin D. Roosevelt’s “Black Cabinet,” argued that although segregation was becoming less socially acceptable, the so-called “black ghetto” was still a prominent characteristic of cities in the Northeastern United States. Weaver argued that housing segregation must be eradicated in the United States. He described the “ghetto” as “the trademark of the color line in the United States” and a national embarrassment because it showed foreign diplomats “constant evidence of our failure to extend the exemplary features of democracy.”11

In addition to collaborating with Jewish organizations, the Americans for Traditional Liberties worked with Luther Wright McNair, the then-leader of the ACLU. The group partnered with religious groups to advocate for the preservation of civil liberties and fight against racial injustices such as segregation. During his time as Old North’s vicar, Howard Kellett collaborated with the ACLU and emphasized the connection between Old North’s history and contemporary political concerns.

The steeple fundraising campaign at the Old North Church in the mid-1950s connected the church to the religious and political concerns of the time.  Individuals and groups from different backgrounds expressed themselves as active citizens and used Old North’s history to answer complicated questions about what it meant to be an American, how American identity linked to Christian identity, and how the nation’s origin story could ensure protections for groups of people that the American Constitution failed to consider.

Historical sites like Old North play a central role in helping people understand American history and apply it to contemporary social and political concerns. Regardless of one’s political beliefs, we believe that the story of Old North’s three steeples connects the church to American history and reveals the complications and contradictions that are inherent in the American story.

3. Encyclopaedia Britannica, s.v. “Cold War, International Politics,” https://www.britannica.com/event/Cold-War.
The term “The Cold War” was first coined by English novelist George Orwell to refer to what he thought would be “a nuclear stalemate between ‘two or three monstrous superstates, each possessed of a weapon by which millions of people can be wiped out in a few seconds.’”

5. Becky Little, “Why Eisenhower Added ‘Under God’ to the Pledge of Allegiance,” HISTORY,  https://www.history.com/news/pledge-allegiance-under-god-schools.