Despite their support of the church throughout the first half of the twentieth century, the Women’s Guild of Old North remains relatively unknown in the modern historical narrative. From behind-the-scenes, the guild maintained the church and accompanying Parish House as a welcoming and homey place, as well as fundraised through various events, having demanded no special attention or authority in exchange for their work. Instead, the women of the guild selflessly embraced their roles as homemakers and aided the church from within the confines of contemporary gender norms. Through traditionally feminine tasks like baking, sewing, and hosting teas and dinner parties, the Women’s Guild served as a vital component of the Old North Church’s success as a religious, cultural, and historic institution, all the while its members were running households and raising families.

On January 25, 1915, twenty-seven female members of Old North founded the Women’s Guild “to assist in all ways possible the Work of Christ Church.” During the preliminary meeting, the group enjoyed a homemade dinner and then elected the first council officers: Louise Montague as president, Matilda Bibbey as vice president, Armanda Pellino as second vice president, Lillian Sanby as secretary, and Carrie Richardson as treasurer. This council structure would remain for the entirety of the guild’s existence. The guild also selected a committee of four members to oversee the drafting of the organization’s constitution and by-laws. 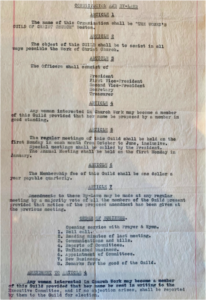 The constitution, composed of seven articles—some of which have since been amended—provides further insight into the structure and function of the organization. The first article declares the organization’s official name to be “The Women’s Guild of Christ Church Boston.” According to the original document, in order to join the group, a woman’s name must be proposed by a present member “in good standing.” However, a 1924 amendment to this article requires every potential member to be approved by an Executive Committee and subsequently elected to membership by the guild. In order to maintain one’s status in the guild, women were required to pay a $1 membership fee each year, which translates to approximately $25 in 2019. In 1925, the organization’s first secretary Lillian Sanby, along with a handful of other members, was “dropped” from the guild due to her failure to pay the fee two years in a row.

The guild’s meetings were held on the first Monday of every month from October to June, the location rotating between the Parish House and members’ homes each gathering; however, in 1924, the meeting schedule was shortened to October to May. The happenings of each gathering were meticulously noted in journals by the secretary, including details as miniscule as the women who volunteered to prepare dinner each month. For instance, in the entry from the October 1915 meeting, found in a maroon buckram-bound journal entitled Meeting Minutes 1915-1921, Secretary Sanby writes, “Mrs. Slade and Miss Bibby [sic] kindly offered to take charge of the supper for the next meeting.” These gatherings were very much a social activity, run as an early twentieth-century woman might run a social at her home—with conversations, household crafts, and desserts. However, the sole purpose of the guild was not to serve as a club; rather, the organization aimed to maintain the outward appearance of Old North, as well as help fundraise for the church through membership fees and events like rummage sales. 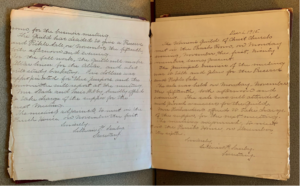 The guild’s projects to support the church revolved heavily around enlivening the building’s modest architecture with decorative pieces and hosting get-togethers, ensuring the church appealed aesthetically to all visitors. For example, during the winter of 1915, the guild provided Christmas decorations for the church. The next month, the women held a New Year’s Eve social, complete with Christmas carols for entertainment. Several years later, in 1924, the guild organized the construction of window shutters made of “matched pine” and painted “dark green” for the church. 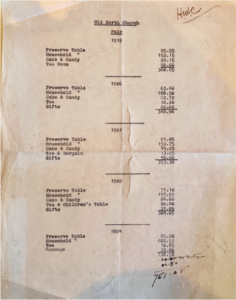 The organization also provided financial support to the church, as well as external charitable causes, through events such as preserve fairs and rummage sales. In just the first year of the guild’s existence, the women “raised $300,…[gave] fifty dollars…to missions, twenty-five dollars to Mr. Sartorio for Italian work, twenty-five dollars to the Waldensian Aid for hospital work in Italy…paid for the Christmas greens, [gave] money for the altar linen and a visitors’ register.” At a fair in 1919, the guild collected a total of $366.85 for the church through the sale of “gifts varied and unusual, as well as necessary and unnecessary articles,” like gourds, cake, candy, aprons, bags, and baskets. Meanwhile, they raised more than double that with $751.08 through a fair hosted just five years later in 1924.

The Women’s Guild was far more than simply a social club for the female members of the Old North congregation. The organization proved to be a prominent source of support for the church in the first half of the twentieth century, whether it was through maintaining the church’s status as a welcoming community space or contributing financially with fundraising events like sales. Yet, the women of the guild sought no recognition for their efforts and did not attempt to disrupt the prevalent gender expectations of the time period—though they also did not allow such expectations to limit their autonomy and ambition. Indeed, they wholeheartedly embraced their place in the domestic realm while simultaneously playing a vital role in the success and historical and cultural significance of the Old North Church. 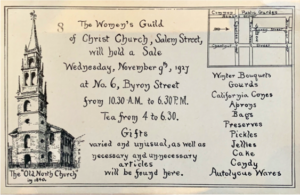