Build me straight, O worthy Master!
Staunch and strong, a goodly vessel
That shall laugh at all disaster,
And with wave and whirlwind wrestle!

It is quite appropriate that the man who wrote a poem associated so strongly with the Old North Church also wrote one relating to shipbuilding (“The Building of the Ship,” published in 1849); as discussed in the previous Messenger article, the Old North and Boston have ties to the sea that are, well, fathomless. These ties are more than rooted in concepts and circumstance, however; the Old North and the wooden ships that sailed past it for centuries share physical roots in their design, construction, and in the case of the Old North and USS Constitution, longevity.

Building a church and a ship might seem, at first glance, wholly incompatible. One is a brick structure, a permanent and fixed landmark. The other is a wooden vessel that travels the globe, floating on a mercurial foundation that both supports and threatens to sink it with the drop of the barometer. But both were built with hand labor, aided by draft animals; both share construction materials (yes, even brick) and methods of construction, and both were the largest objects constructed in Boston at their time. Materially, the towering steeple and soaring gallery of the church and the massive hull and lofty masts of USS Constitution are built of wood, massive timbers that drew the first settlers from Europe (and particularly timber-starved England, which was nearly deforested from the construction of ships and burning of charcoal for smelting). Colonial America provided timbers of such size as to leave the timber merchant drooling. Trees like pine, white oak, and fir provide large, strong, straight timbers ideal for everything from main support beams to hull planking and decking, rot resistant and durable (USS Constitution also famously utilized Live Oak, but this twisted, dense and tool-dulling timber was of less use in the construction of the squared building, particularly as resisting cannon fire was not a primary concern for the parishioners). Finer grade furniture woods, such as cedar, walnut, or cherry, serve decorative purposes for both the heavy warship and house of worship, be it pew rails or paneling. Brick serves as a fireproof building material, be it the walls of the church or the flooring under the ship’s stove. 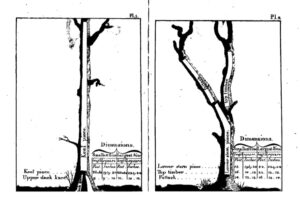 Timber guides such as this aided builders in planning which trees to harvest from particular pieces of timber (Plates 1-2, 15-16, lithograph by Henry Stone, in Peter Guillet’s Timber Merchant’s Guide (1823) [USS Constitution Museum Collection 1742.1])

These timbers must be joined together, and each has its own unique challenges. The church, for example, must support a massive open gallery space without collapsing inward, while USS Constitution required absolute waterproofing and copper fittings below the waterline to handle corrosion. However, the basic ways they are held together are the same. Construction in the Colonial/New Republic era (the church was constructed in 1723, the ship launched 1797) used different types of joints depending on the location and type of stress the joint would be subjected to, while more complex decorative joints were usually the reserve of furniture and cabinetry makers. The most commonly used were/are the “Butt joint,” “Rabbet joint,” “Mortice and Tenon,” “Scarf (or Scarph),” and “Dovetail” joints.

The butt joint is the simplest; two ends “butt” together. This joint requires a pin or fastener when used in construction (glue will suffice for smaller projects like furniture, although it is a weak joint to rely upon). These are no mere nails; the fittings can be many feet long and came in a variety of materials. The simplest to manufacture is the “Treenail” (pronounced “trunnel”), made of wood, Black Locust being preferred for its rot-resistance. Pounded into holes drilled by an auger, the trunnel ends were split to widen them and cut flush; on a ship, they and the timbers they ran through would swell with water, expanding and adding an extra measure of strength as they jammed tight. Iron or copper fittings were more expensive, and mostly used on ships, the former above the waterline and the latter below, as copper does not corrode nearly as quickly as iron. The trade off, of course, is cost, particularly for copper; as a result, most buildings of the period used them sparingly, with wide-spread use not taking off until advances during the Industrial Revolution made them both cheaper and more standardized. (The truss work in the Old North steeple, replaced after falling to Hurricane Carol in 1954, makes use of large threaded bolts, for example.)

Fittings were also used to secure the other types of joints. Rabbet joints have overlapping “shelf” sections which provide more surface area and a lip to run fittings through, more securely locking the pieces together. More surface area running perpendicular creates a stronger joint, creating overlapping floor timbers or the distinctive “big and small” English bond pattern of brick laying on the Old North, with alternating “stretcher” and “header” blocks (the game “Jenga” is an excellent example of this) laid in thick walls doing the job that thinner “curtain” walls and metal framing would later perform. Better still, if more complex to make, is the Mortice and Tenon, a strong peg and slot joint. A building’s frame posts fit into the foundation sills the same way a mast “steps” into the keelson, or inner keel (the backbone of a ship) using these joints. The Scarf joint is similarly strong, especially when cut with locking “hands” resembling a hand shake or train couplers; such joints helped add incredible strength from the keel of a ship to the collar ties and rafters of a building (on USS Constitution, such joints were also run along “strakes” or thick lines of timber in the deck, tying the ship together fore-and-aft over her massive length). Dovetails, when used on corners, provide similar locking joints which resist being pulled apart even before a fitting is installed, although it isn’t as effective as scarf joints or pinned rabbet joint in-line.

A landsman watching a ship’s ribs being raised or a seaman observing a barn or church raising would have recognized the procedures as one and the same; small “gin poles” or larger two-legged leaning “shear cranes” could be used to aid in the erection. The terminology might be different, the joists, girts, and purlins of a builder sounding just as strange as the spirketting, garboard strakes, or futtocks of a shipwright, but the basic practice of construction continued similarly, be it assembling siding or hull planking. The overlapping seams of a shingle roof or clapboard siding were familiar to the men making “clinker-built” overlapping-seam boats. The sixteen “diagonal riders” of USS Constitution, pioneering design features tying the underside of the berth deck to the keel, work just as the diagonal trusses in the steeple do to resist strain. As for topping out, the act of raising a ship’s masts after launch or finishing the highest points on a church’s steeple, the jack tar or steeple jack shared more than a name as they worked high in the air assembling the tallest structures in Boston, the lack of modern safety precautions adding a sense of daring to their already impressive work. The symbolic act of nailing a small tree to the highest point was often observed by both. Paint and lightning rods protect both from the effects of weather.

The Old North Church and USS Constitution still stand tall, hundreds of years after their construction. That they still do so is a testament to the quality of their workmanship, the skill and hard work of their designers and builders, the continuing efforts to restore and preserve these complex historic structures, and the basic construction principles both share.

Bernard Rosenthal Trubowitz began working in the museum field as a teenager, from volunteer work at small sites to five years with the Student Conservation Association and National Park Service. He has worked at numerous historic sites/museums in the Boston area, including the Old North Church, the Metropolitan Waterworks Museum, and the USS Constitution Museum. He specializes in the study of the Industrial Revolution, both the physical mechanization and the associated economic growth and social changes. He has been involved with the Lawrence, MA “Bread & Roses” labor history festival and the Lawrence History Center. As a student at the University of Massachusetts, Lowell, he majored in History, with a minor in Work, Labor, and Society. Through the university he produced a research video used as part of an educational program with the Lawrence Public Library and local high schools, and his research on the Essex County Jail Records was published in the New England Journal of History . At Lowell he earned numerous academic awards and membership to several national honor societies. Bernard enjoys working at several sites as a costumed period interpreter and working with historic steam and early electrical equipment.