This article is the first in a three-part series.

In the early morning of July 2nd, 1839, off the shore of Cuba aboard a Spanish schooner called La Amistad, a group of illegally kidnapped and enslaved Africans managed to free themselves from their chains and fight back in an attempt to re-secure their freedom. Their rebellion, voyage, and subsequent arrest and trial in the United States caused a sensation throughout the Union. At stake were the lives and freedom of 36 men, three girls, and one boy — those from the Amistad who had survived long enough to hear the final court decision.

With 2019 being the 180th anniversary of the uprising, the case deserves a reexamination, particularly in light of our society’s renewed interest in social justice and activism. The Amistad trial reinvigorated the debate over the limits, if any, to slavery in the United States. It also served as an example of the evolving strategies for abolitionists confronting slavery as the 1800s progressed. But most importantly, the event was a remarkable example of the power of a community, or communities, working together in the face of daunting odds. Actions taken collectively, even relatively small contributions, can shape history. 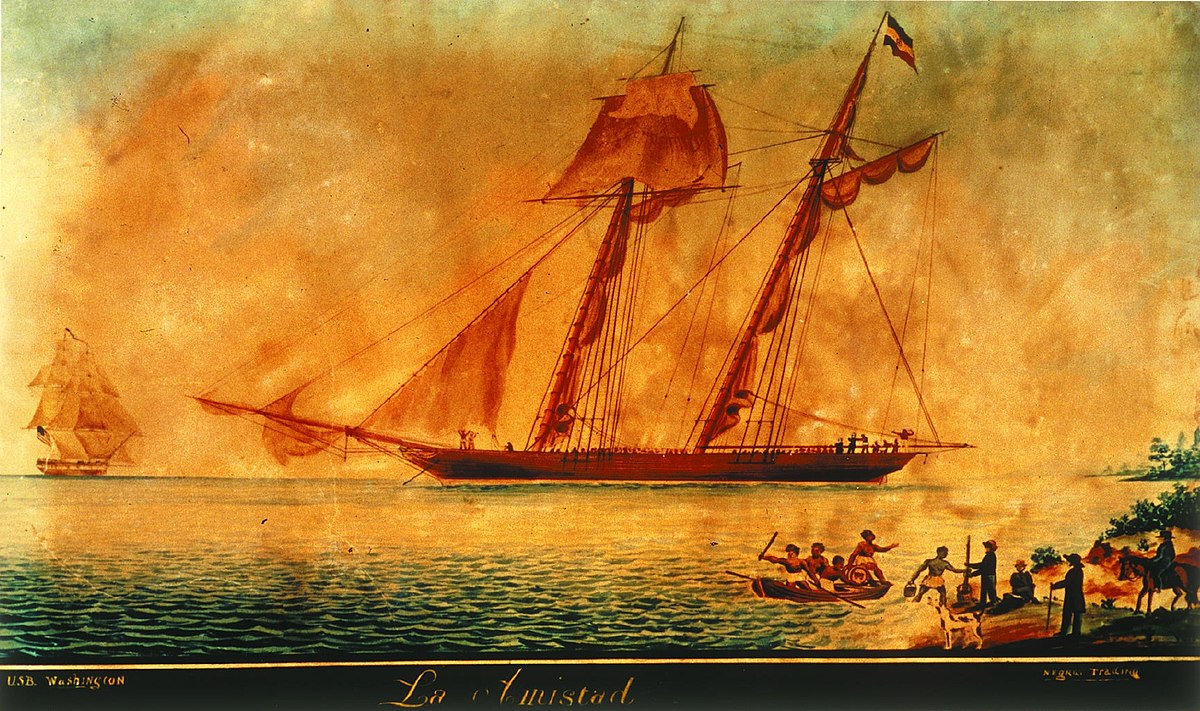 Artist unknown, contemporary painting of the sailing vessel La Amistad off Culloden Point, Long Island, New York, on 26 August 1839; on the left the USS Washington of the US Navy (oil painting).

In one of the more recent histories about the event, author Marcus Rediker takes a fresh approach in The Amistad Rebellion: An Atlantic Odyssey of Slavery and Freedom by portraying the event as much as possible from the eyes of the Africans themselves. This article aims to do the same while weaving in all the other participants that contributed in this collective action. A comprehensive overview of the Amistad events, historical context, and trial are necessary in order to analyze them thoroughly. Though a number of nations had agreed to outlaw the international slave trade, the illicit traffic in human lives still flourished along the western coast of Africa during the 1830s. Those who ultimately ended up on La Amistad hailed from a variety of regions in what is modern-day Sierra Leone: though often referred to later as “Mende”, these people actually included a number of different cultural groups from the region including Gbandi, Kono, Temne, and others. [1] All had a fairly similar story, though. They had been illegally kidnapped, then sold in Lomboko, one of the notorious, European-run slave trading “factories”. From Lomboko, they began the long and horrifying Middle Passage to Cuba aboard the slave ship Teçora.

In Cuba, a smaller subset of this group from the Teçora were bought by two plantation owners named Ruiz and Montes and put aboard a smaller schooner called La Amistad for transport to their sugar plantations. They were issued even less food and water on this trip, and some had been severely beaten along the way. Already frightened of where they were going and what would happen once they arrived, the Amistad’s cook had further intimidated the Africans with pantomimed indications that they were to be killed and eaten. Soon after this threat, the captives somehow managed to escape their chains; reports varied as to how. One man in particular, Sengbe Pieh (more famously known as Joseph Cinqué), was the likely instigator and primary leader, and Cinqué later came to symbolize the rebellion for the public during the trial. But he did not act alone: the captives were led by a number of men who had served as leaders in their communities back home. In the pre-dawn dark on the morning of July 2nd they armed themselves with whatever they could find and stormed the ship. The Amistad’s captain was killed in the fighting, along with the cook who had taunted the Africans with cannibalism. The rest of the crew escaped overboard, or were captured, including the two enslavers from Cuba.

Their rebellion and voyage over the ensuing months is a fascinating story in its own right. But simply put, without navigation experience, the Africans had to rely on their two captured Spanish enslavers, Ruiz and Montes, to direct the ship back to Africa. Hoping to be discovered, the two instead attempted to stall by zig-zagging across the Atlantic. Eventually the ship happened to land near the coast of Long Island in New York in search of water. The Africans were then captured by the American navy and charged with piracy and murder.

The ensuing trial that took place was long and immensely complicated. Numerous parties entered the legal battle, including the Spanish government. For the captives, it would have been entirely disorienting. Fortunately, a legal defense for the Africans was quickly set up by abolitionists, led by Attorney Roger Baldwin. The speed in which a defense was arranged was due in part to a relatively “rank-and-file” abolitionist named Dwight Janes who happened to be on the scene when the ship was brought in to New London, CT. Janes quickly wrote to numerous “higher ups” in the movement. One of these correspondents was Lewis Tappan, a wealthy businessman from New York who helped organize and fund support for the Amistad captives. [2]

The defense managed to put the brakes on the proceedings and ensure that the Africans received some sort of official trial at least, but communication was a major issue with only indirect translation available. A solution was discovered when a Yale linguist who agreed to help learned to count 1-10 in Mende, wandered the waterfront of New York counting aloud, and caught the attention of two sailors, James Covey and Charles Pratt, who had been born in the same region of Africa. They were currently enlisted on a British brig of war that happened to be in port; both had prior experience with being enslaved themselves and agreed to help. [3]

In the US district court, the Amistad Africans insisted that they had not been born into slavery, over time using English to tell their story themselves — some, including a young boy named Kale, had learned the language during their imprisonment. They reported of the horrors encountered during the Middle Passage, how they seized the opportunity to take over the ship, and their wish to go home to rejoin their families. Despite the horrible conditions in the New Haven jail, they managed to overcome any feelings of despair and helplessness through mutual support, building from their shared experience. The leadership qualities of many of the captives (including but not limited to Cinqué’s well-publicized efforts), as well as the collective action mentality, provided the foundation for group cohesion and continued perseverance over the long months of imprisonment ahead. They used every opportunity they could to learn about their new surroundings and how to be active participants in securing their freedom. While many proslavery writers attacked the proceedings, the Africans became a sensation of sorts, with a constant influx of visitors to their prison, newspaper attention, and even plays and paintings made of their story. [4]Much of this attention helped to add a humanizing element to the case in the (white) public’s mind, confronting people with the fact that there were human lives at stake. Instead of a list of names, or worse, a blanket group identity as “mutineers,” the Amistad Africans had personalities, faces, and individual lives.

After a complex trial, the US district court reached a stunning decision: Judge Judson, known for his overt racism, ruled that the Amistad captives were “born free and ever since have been and still of right are free and not slaves”. The decision even ordered that the Africans be returned home under the government’s expense. The ruling was still rather limited in scope and actually returned the ship’s enslaved cabin boy/sailor, Antonio, back into slavery. But it meant freedom for the captives on trial. That is, until the Van Buren administration appealed the decision in an attempt to smooth over relations with Spain[3] , effectively bringing the battle to the US Supreme Court. [5]

In this episode of Illuminating the Unseen, Jaimie examines the struggle for Black freedom in Massachusetts from 1723 – 1795. Jaimie tracks what the…