This article is the second in a three-part series. Start with Part 1 here.

The odds were even more stacked against the Amistad rebels in the Supreme Court: five of the nine justices, including Chief Justice Roger B. Taney (of the infamous Dred Scott decision), were southerners. Even Justice Joseph Story, from Massachusetts, had earlier ruled in favor of enslavers before.[1]Tappan and other abolitionists had been happy with Roger Baldwin’s defense, though less so (perhaps unfairly?) with attorneys Theodore Sedgwick and Seth Staples. But abolitionists saw an opportunity to raise even greater public interest in the case: by enlisting the help of former president John Quincy Adams, who had been observing the proceedings with interest and providing advice for months. Now serving in the House of Representatives, Adams had not argued a case in over thirty years; yet he was well-known for his anti-slavery views due to his fight against the “gag rule” in Congress, which prevented any discussion of slavery in the House (a fight that Adams would ultimately win a few years later in 1844).[2]Baldwin and Sedgwick would stay on and apparently did not object to the arrangement, but Tappan met with and arranged for the former President to take on the role of senior counsel and deliver the closing argument. For his own part, Adams explained that he had “no higher object of ambition” than to help those “unfortunate men”. [3]

The Supreme Court met in late February of 1841 to hear arguments. Attorney Baldwin argued persuasively for four hours, even utilizing a states’ rights argument that would seem ironic some twenty years later during the Civil War: that the status of blacks in America was a state issue, not federal.[4]Adams then followed, with arguments that lasted nearly 8 hours and spanned two days (delayed further when one Justice died in his sleep between sessions). While much of the basis of Baldwin’s and Adams’ arguments were on the detailed legal matters of the case, a significant part would rely on moral arguments as well, including the absurdity of considering human beings as property. During his address to the court, Adams remarked:

Known for his oratorical skills, if Adams’ role was in part to bring greater public attention to the case, he was playing the part well. He added, “Can a greater absurdity be imagined in construction than this, which applies the double character of robbers and of merchandise to human beings?”.[6] 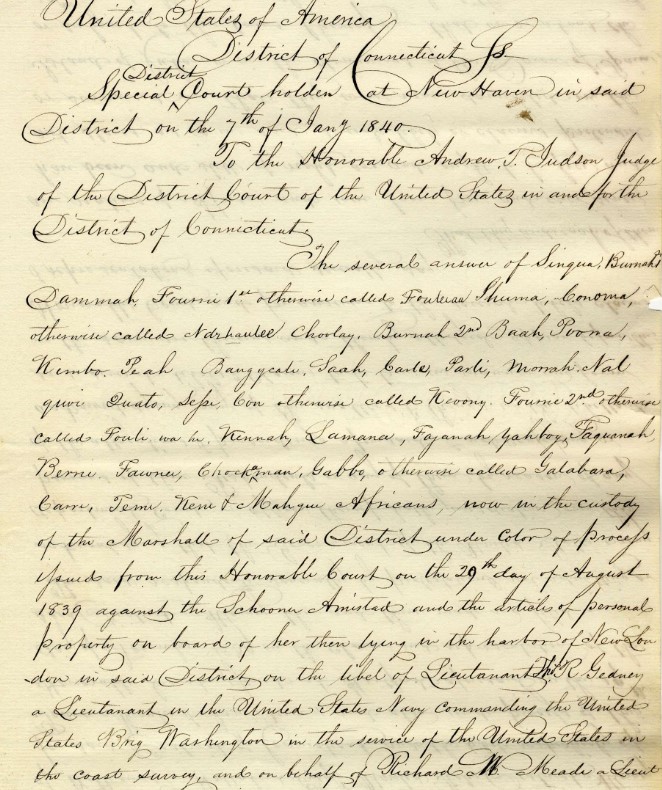 After risking their lives for freedom, a year and a half of American imprisonment in terrible conditions, endless court proceedings, and what must have been for the Africans a gut-wrenching appeal after their initial victory in the District Court, the fate of the Amistad Africans was finally sealed: a few weeks after arguments, on March 9th, the Supreme Court had their decision. Adams wrote to his co-counsel Baldwin of the verdict: “The decision of the Supreme Court in the case of the Amistad has this moment been delivered by Judge Story. The captives are free…”[7]

In another stunning victory, the Court agreed 7-1 that the Africans were never truly slaves and thus had a right to defend themselves. One justice had died and, of course, could not render a decision, but the lopsided victory was perhaps the most surprising part of all. Bizarrely, given his later reasoning in the Dred Scott case, Chief Justice Taney sided with the majority.

While a compelling story in its own right, with numerous books and even a major motion picture based on the event, what truly stands out are the more universal elements of the story, as well as the ramifications of the case. The event showed the evolving strategy of abolitionists in the United States: that more could be done in the fight against slavery than the passive moral reasoning typical of white abolitionists. It also serves as an example of what can be accomplished by people working together, and how a collection of relatively small actions in aid of a cause can build up to achieve momentous results.

The immediate legal results, of course, meant everything to those on trial, but were comparatively small in the big-picture sense. The Africans were free, but the Supreme Court struck down the part of the District Court’s decision mandating that the U.S. Government provide for their return home. Money had to be privately raised over the following months to fund their return. The decision also maintained that slavery was legal, so it did little to help enslaved people currently in the U.S.

To be sure, there were distinct differences between the Amistad uprising and most other slave revolts that both contributed to the group’s eventual freedom and, ironically, limited the scope of the verdict in their trial. They were very obviously kidnapped from Africa, and had been so by the Spanish empire, not any American plantation or household, perhaps creating some distance in the minds of some Americans. So even with powerful pressure from the Spanish government and Van Buren administration, as well as pro-slavery forces in general, the Amistad Africans still technically had the law on their side (as opposed to a domestic slave rebellion, where, as unfair as the laws were, the legal system always worked fully against the enslaved). Cinqué and his associates had some advantages that the typical enslaved person would rarely, if ever, have in American slave society. And yet, their success and freedom was still a historic moment. A group of 36 people that had little knowledge of the language or customs of the strange land they were in, with some able assistance from a group of ostracized radicals in that same strange land, had managed to resist and prevail against one of the strongest socio-political combinations in history. It was a system designed to work against the Africans in every way, and even with the law on the rebels’ side, the slave society still almost overwhelmed them. But sometimes you can beat the system. For abolitionists, there were many lessons to take away from this triumph.

For one, the case offered some interesting legal strategies for abolitionists. Despite the odds against them along the way, there now was some hope and precedent that legal challenges to slavery could succeed. Perhaps this also eventually fueled the devastation felt by abolitionists decades later after the Dred Scott decision dashed those hopes, but at this time in history the case was a much needed victory for anti-slavery factions. The Supreme Court had confirmed that black people did have at least some natural rights — a concept not always altogether clear to this point in American society. Interestingly, in 1839 Tappan had worked out another interesting legal maneuver in defense of the Africans: using the testimony of those who had been beaten aboard the Amistad, Tappan reversed the tables by bringing charges of assault and battery and false imprisonment against Ruiz and Montes. Montes, even though found not liable and released, apparently thought better of his current situation and fled back to Cuba.[8]One lesson learned was that there were a number of legal avenues available in order to fight back against unjust laws, directly or indirectly.[9]

During and after the time period of the case, another significant strategy began to gain traction. While black people had always actively resisted slavery, the Amistad event seems to have lit a fire under white anti-slavery audiences to get involved as well. Prior to the trial, many (perhaps most) white abolitionists quite literally served as an early example of the modern conception of people who offer their “thoughts and prayers” for a cause, but little else. This case, though, seems to have spurred on some of the more passive supporters to come around to what black people had long been advocating for: a more active, and if required a more militant, role in the cause. Petitions were fine, but more planning, more money, more active support had achieved results and would be needed going forward. As one example, during the District Court proceedings, reports surfaced that if the court ruled that the Africans would be sent back in to slavery, then the Van Buren Administration had ordered the USS Grampus to spirit them away to Cuba before the abolitionists could appeal. This would have been questionable on both legal and constitutional grounds, but the abolitionist response is also surprising, given their track record: a planned jailbreak if the Grampus acted on its orders. The Africans ultimately were not sent back to Cuba so neither the Grampus nor the captives’ allies carried out their plans, but even the idea shows a shift in anti-slavery tactics: from “thoughts and prayers” to planning jailbreaks. [10]

[3]For further information on this and Adams’ own reasoning for joining the legal team, see Jones, Mutiny on the Amistad, pgs. 152-155.

On the night of May 31, 1743, terror struck the Rising Sun. As the ship tracked eastward off the coast of…