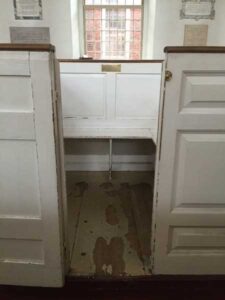 On December 29, 1912, the date that happened to be the 189th anniversary of its first service, a newly restored and refurbished Old North Church opened for the first time since the spring of that year. Over 1,000 people filled the pews, aisles, stairways, and entryways to hear the words of Bishop William Lawrence, the rector of Christ Church. In attendance was former president, Rough Rider, and all-around renegade, Theodore Roosevelt.

Roosevelt came to the church and sat in pew #25. Popular tradition maintains that Teddy chose this seat specifically because of its illustrious association with notorious figures. In 1759, a Son of Liberty (and smuggler) named Capt. Daniel Malcolm owned pew #25. Before that, the pew belonged to a privateer named Thomas Gruchy, who captured the four wooden angel figures from a French ship during King George’s War in 1745. As a figure full of bravado, it makes perfect sense that Teddy Roosevelt would have chosen to sit in the “pirates’ pew”!

That’s a wonderful sentiment; it’s also entirely untrue, based on admiration for the adventurous side of our 26th president, rather than on the evidence before us. In fact, Roosevelt’s visit to Boston was political in nature. Roosevelt’s splitting of the Republican Party into the Progressive Party during the 1912 election forced him to campaign vigorously. He came to Boston on Friday, December 27 to meet with the leaders of his “Bull Moose Party” in Massachusetts and stayed with Dr. William S. Bigelow at 56 Beacon Street. On Sunday the 29th, the Boston Globe reported that Col. Roosevelt would “return to Oyster Bay this afternoon.” What they didn’t expect was for the presidential runner-up to appear at one of the biggest events in Boston the same day.

At least two newspapers covered Roosevelt’s visit to Old North Church on December 29, 1912. The following day The Boston Daily Globe, and The Boston Post published articles describing the restoration of the church, the oration given by Bishop Lawrence, as well as Theodore Roosevelt’s arrival at the church. However, the two extent articles are very different in their approach to Roosevelt. The Boston Post made only one mention of “Ex-President Theodore Roosevelt,” stating that he arrived at the beginning of the bishop’s speech and was seated in a pew belonging to the parish historian (and Senior Warden) Charles K. Bolton. Old North Church records at Massachusetts Historical Society show Bolton’s pew to be none other than #25.

While the popular story of Roosevelt’s choice of seating is undoubtedly disproven, there is more to his visit to Old North. Whereas the Post referred to Teddy as “Ex-President,” the Boston Daily Globe referred to him as “Col. Roosevelt” throughout the two-page article. Whether this was done for political purposes is not clear by the articles alone, but the article from The Boston Post does go into great detail about the alterations made to the church.

It is obvious that the Globe was more interested in Roosevelt than the church’s restoration. In the 1,200 word article, 451 words are devoted to Roosevelt and his demeanor during and after the service. The rest of the article mentions the words spoken by Bishop Lawrence and of the fundraising effort to complete the restoration, but it mentions nothing of the actual construction, restoration, or research behind the project.

From the description in the Globe, Roosevelt sat through the service so attentively that it “could not be excelled by the most devout churchman.” Accustomed to being in the spotlight, Roosevelt must have been aware that his every move was being watched by the crowds slowly realizing his presence. By the time Bishop Lawrence had concluded his sermon, a line began forming in the center aisle of the church of “men and women-mostly the latter” to meet the larger than life American. The Globe article goes on to say that Roosevelt shook every hand, and had a gentle smile for every greeter.

All was going pretty well for Roosevelt (who was late to a luncheon) until a young woman asked for his autograph. Perhaps on purpose, Roosevelt reported that he had no pen and apologized. But in a move that probably annoyed the former president, a young man waiting to meet Mr. Roosevelt announced that he had a pen. For the next half hour, Teddy Roosevelt was “made the victim,” as he signed every letter, paper, and even pages torn from the Old North Church hymnals. Ever used to this kind of attention, Roosevelt warned most of his admirers that they would “be sorry when they saw his handwriting.” 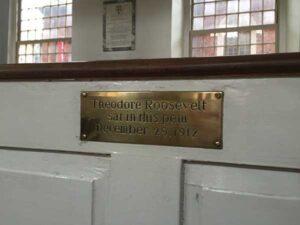 Today, a small brass plaque on the walls of pew #25 commemorates Theodore Roosevelt’s visit to Old North Church on December 29, 1912. As a celebrated American figure, T.R. is just one more reason to visit Old North. You can learn more about Roosevelt, the other owners of pew #25, and the other presidents who have visited Old North Church every day that the site is open.