In July 1765, Constable Isaac Townsend sat quietly at the door of his watch house, listening to sounds of Boston’s North End. Just after twelve PM, Townsend recalled hearing “somthing noisey.” A group of rowdy young men passed, disrupting the stillness of the warm evening. Townsend, moving from his post as sentry, approached the group. He later recalled in his monthly report that the men had “ask’d me what we wanted.” Responding matter-of-factly, Townsend answered, “peace and good order in the streets.” Townsend and his four assistants—local men enlisted to serve in the watch—were responsible for keeping peace and order during the night in eighteenth-century Boston. They set out at intervals between nine PM and dawn to monitor the town as people slept, carrying an hourglass to tell time, a lantern to light the way, and a staff to indicate their office. Townsend had likely just returned to the watch house after traveling to the outer bounds of his ward—where Hanover Street met Middle Street—through shipyards and warehouses, canvassing the thickly-settled streets of the North End when the rowdy group caught his attention.[1] 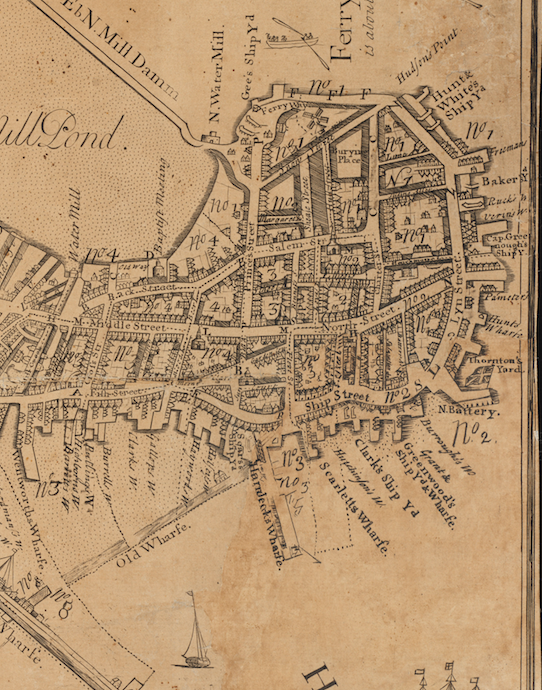 Part of a larger peace-keeping network of justices of the peace and day constables, the watch served on frontline for keeping order through the protection of persons, property, and the peace. While not empowered with the authority to arrest, the watch exercised discretion over whom to detain, to keep overnight, and then release—and whom to present to a justice of the peace in the morning. At the end of each month, the constable in charge of each watch unit submitted a report on the overall state of the town, watchmen’s attendance, and what had occurred. These records have bequeathed to us rare documentation of eighteenth-century urban surveillance and policing. Though varied in length, depth, and attention to detail, the reports offer a window onto aspects of family, intimate, and everyday life often hidden from the historian’s view.[2]

Over his twelve-year tenure as Constable of the North Division Watch, Townsend composed his reports on different sized sheets and varying types of paper, and submitted them in a range of conditions. Some showed signs of exposure to moisture—possibly in a jacket pocket on a warm day, while others contained burn marks, thus evidence of writing by candle light. Townsend included explicit details about the weather, his personal dilemmas, and anecdotal thoughts. He wrote with great attention to detail and in a pleasant, neat script. Serious about his duties, he once asked forgiveness for a missing report, citing his reason as ” a lameness on the pen finger” and signed his reports to the town selectmen as “your most humble servant.”[3] 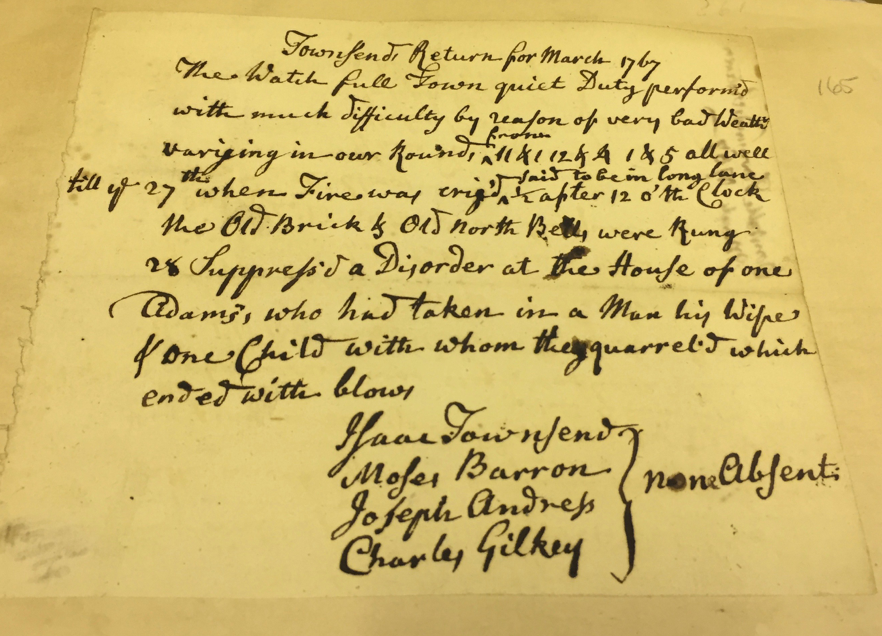 Keeping peace and order brought Townsend and his assistants into contact with a vast range of personal and environmental circumstances. Townsend’s report for March 1767 detailed typical concerns for the watch:

The Watch full town quiet duty performed with much difficulty by reason of very bad weather… all well until 27th when Fire was criy’d said to be in Long Lane ½ after 12 o’th clock the Old Brick and Old North Bells were Rung. 28 Suppressed a Disorder at the House of one Adams’s who had taken in a Man his wife and one Child with whom they quarrel’d which ended with blows.

Concerns for Townsend’s watch most commonly related to protection of property (fire, theft, breaking and entering, trespass) and protection of persons. In terms of the latter, they intervened in fights and attempted sexual assaults; and they provided support to those without lodging and for individuals suffering from abuse or alcohol. In February 1768, Townsend took several seamen who lacked lodgings to the watch house for the night, citing his reason as “to prevent what might happen to them [it] being very dark & difficult.” Cases of drunkenness fell into this category as well. On one occasion in September 1765, Townsend wrote of three women “very much in drink,” one of whom was “carried to the watch in a wheel barrel” and put in the “coal house until daylight.” Again, in January 1769, Townsend reported having “taken into our care several sea men whom we found in our rounds, who were in danger of perishing they being in liquor and destitute of lodgings.” The actions of the watch demonstrated a level of commitment to social support, working not just to combat drunken disturbances, but to assist and protect those incapacitated by alcohol. While on the one hand this action prevented the intoxicated from wreaking havoc in the street, the examples reflect the watch’s general practice to benign, disorderly behavior: jailing was unnecessary, and shelter, rather than punishment, would safeguard order.[4]

Townsend’s work in the North End of Boston in the 1760s and 1770s blended watching, walking, writing, and listening to monitor the community and to keep order. In writing his final report as constable of the North Division Watch in September 1774, Isaac Townsend made a minor edit to his entry: “By virtue of my office of Constable of the North Division Watch in Boston with my assistants have carefully performed the duty of the watchmen in our respective ward using our best endeavors to procure peace good order therein according to our instructions.” This small change demonstrated an important distinction about the work of the night watchmen: peace was not something to be passively maintained, but something to be actively created. And the most diligent attention was required of Townsend and his assistants to keep the peace in a town on the verge of revolution.[5] 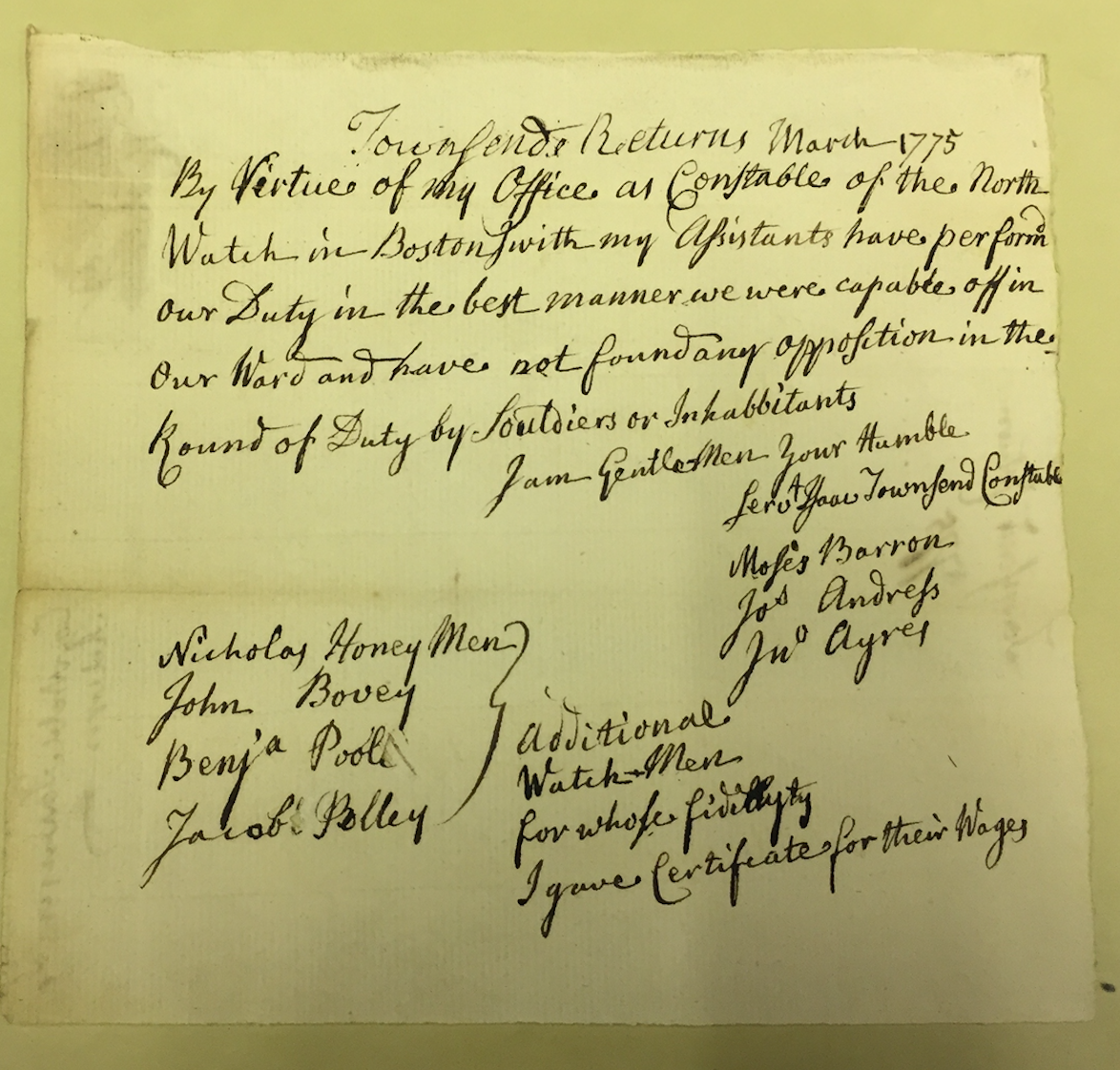 Nicole Breault is a second-year Ph.D. student in early American history at the University of Connecticut. In 2014, she received her master’s degree in American History from the University of Massachusetts Boston. Her research is focused on law, culture, and society in eighteenth-century British North America with an interest in the history of governance and institutions, space, and the family. Her dissertation, “The Night Watch of Early Boston, 1662-1838,” seeks to construct the first comprehensive study of the night watch system during the long eighteenth-century. The project considers how Boston’s night constables monitored, managed, and addressed social order prior to the establishment of a municipal police force and deepens our understanding of the long trajectory of how the policing of community, intimate, and family life was conducted and delimited.

Detail of North End. William Price, “A new plan of ye great town of Boston in New England in America, with the many additionall buildings, & new streets, to the year 1769”, G3764.B6 1769.P7. Courtesy of Norman B. Leventhal Map Center, Boston Public Library.

[2] Beginning in 1761, the town ordered each constable to “keep a fair journal of your doings every night, how you find the state of the town, and who of the watchmen are on duty” and required a written report be submitted once a month. North Division Watch Appointment: October 1773, MS f Bos. 7, Boston Town Papers, 7: 287.